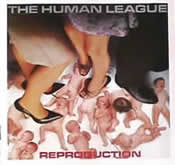 The Human League. A famous synthpop group with a number of big hit singles, now resigned to the past like so much moldy cottage cheese.

However, the League is still together, recording quirky electronic love songs and on rare occasion performing as part of 80's Revival tour packages.

There was a time, long ago, before the huge successes (and eventual commercial obsolescence) that the Human League were truly great. Before the addition of two female backup singers, before their breakthrough albumDare!, the League was a lyrically confounding and musically astounding electro art rock ensemble.

Their first two albums, Reproduction and Travelogue, were miles more striking and original than any other rhythm-oriented electronic records of the time. Phil Oakey, the group's leader and vocalist, sang of bizarre scenarios involving universe-engulfing 7inch records, crossbreeding between crows and human children, and a secret desire to be an Empire State Human. 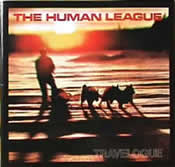 These were not regular pop songs. These were surreal short stories as well as allegories about isolation, consumerism, and The Dignity of Labor. With simplistic rhyme schemes and left-field imagery, a person couldn't help being simultaneously amazed and amused at Oakey's bombastic delivery.

Here are two of my favorite couplets to be found within these wonderful records:
Dehumanization, Is such a big word It's been around since Richard The Third.
Dehumanization, It's easy to say But if you're not a hermit, You know the city's ok.

As heavy as any Sabbath riff, the epic Black Hit of Space tests the conviction of your speakers while Oakey's lyrics evoke a b-movie plot more absurd than anything dreamt up by Ed Wood. Still, Black Hit sounds as fresh and sharp as it did twenty years ago.

Other tracks like Being Boiled mirror the rhythmic & percussive styles of The League's post-punk contemporaries, translating acoustic drumbeats into their own electronic arrangements. (The band's first record label, Fast Product, was also and early home to Gang of Four and The Mekons.)

Before discovering an appropriate singer in Phillip Oakey, Martyn Ware and Ian Marsh had begun on their own as an instrumental group called The Future. From the inception of the League in 1977, this duo was responsible for the bulk of the group's musical composition, programming, and production.

In 1980, Ware and Marsh left The Human League to form B.E.F. (The British Electronic Foundation), which they led in conjunction with a pop outfit called Heaven 17. Two years after their debut single [We Don't Need This] Fascist Groove Thang was banned by the BBC for it's anti-Reagan sentiments, the group went on to release no less than three top-twenty records.

Phil Oakey, desperate to rebuild the Human League for an upcoming European tour, recruited two teenage girls (Susanne Sulley and Joanne Catherall) as backup singers. In 1981 the new Human League released Dare!, an album that went on to sell over five million copies, fueled by the worldwide top 40 hit Don't You Want Me Baby.

Sadly, neither Heaven 17 nor this second Human League incarnation have ever been able to match the creative heights achieved on the Reproduction or Travelogue albums.