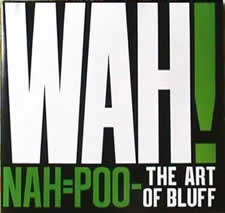 Wah! released singles as Wah! Heat before shortening their name. Later, Pete Wylie used other variations of Wah, such as Shambeko say Wah!.

Listening to this record in 2002 Wah! sound even better than I remembered them sounding. The weak part of the band is Pete Wylie's vocals.

I have a theory that there is no such thing as a bad vocalist in rock. Vocalists with odd voices actually end up with something unique and individual. However, Pete Wylies voice was not strange or bad. His voice was just awfully regular.

This was the curse of Wah, as far as I can tell. His guitar playing is wild, filled with open chord jangling riffs right out of Paul Weller's early Jam days.

On the Pete Wylie Web site there is a review of this disc that compares the instrumental The Seven Thousand Names Of Wah! with Mission Of Burma All World Cowboy Romance (which MOB played in their recent reunion with Hugo, the drummer of Gang Of Four). It is a great comparison that I agree with.

Wah! have a great guitar based sound, and this record sounds even better with the 7 bonus tracks added. Four songs from early singles, an NME tape of the MOB styled instrumental mentioned above, and two Ian Broudie (Big In Japan, Lightning Seeds) mixes.

Ian Broudie was responsible for the great production on Echo's second LP 'Heaven Up Here'. On this CD there are Ian Broudie mixes of Forget The Down (a great song in its own right, from a 7inch) and Somesay (my favorite track on the LP).

This is the right place to start if you want to check out Wah!