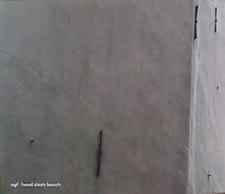 Antye Greie-Fuchs is the vocalist of the Kitty-yo band Laub. She appears on the Naima CD by Vladislav Delay. She also appeared with him as AGF/DLAY on Mille Plateaux's Electric Ladyland compilation.

The AGF/DLAY song The Return Of Us was my favorite song on Electric Ladyland. Now we have a full length by her as AGF. It is not an easy record. It sounds like stuff on the Ant-Zen or Hymen label.

There is an industrial feel that is combined with the abstract machine tones her partner Delay uses. AGF sounds right at home on Kit Clayton's label Orthong Musork.

The names of the songs are only listed in a hard to read graphic on the CD, so be prepared to decifer. Impuls (10), Object (19), Trink und Vergiss Mich (22), & Specify U (23) are my favorites. Each of these tracks have Antye's voice prominent, accompanied by sounds that remind me of a cyberpunk novel where the heroine has to live in a hacked together safehouse in an inhospitable environment.

My favorite of the other tracks is Kassandra (5). This cut has a sound like one of the pygmy recordings Rykodisc released as 'Heart Of The Forest'. A wooden tapping sits on top of an electric hum, leading to Grave Wand (6).

Grave Wand continues quietly with a sound like you would hear when going Beneath The Planet Of The Apes, finding long lost machinery running mysteriously, without apparent keeper.

This CD sounds like it was not meant to be analyzed in a song by song fashion. The disc has a mood about it, and the tracks each contribute to the mood. That said, the songs 5&6 (played together), 10, 19, 22, and 23 knock me out.