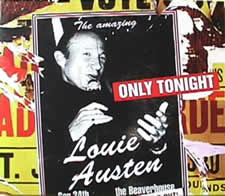 Louie Austen is a 66 year old Viennese Man who croons like a rat pack singer, but who is backed with dirty lounge electro by Mario Neugebauer and Patrick Pulsinger of Vienna's Cheap Records.

This CD is better than I had hoped. Before I heard it I was prepared to be disappointed because I had seen that there were only 8 tracks, and I already knew 3 of them. As it tuned out, none of this was a problem. The 8 songs total 55 minutes, and the song I knew from Consequences is completely reworked by Ken Cesar on this disc.

The other 2 songs I already knew are Amore and Grab My Shaft (his duet with Peaches) from the Cheap 12'. They are both great cuts that I didn't mind hearing more often. Ken Cesar (backing vocals) also appears on the opening track Music.

Hoping has music that reminds me of Olivia Newton-John's Physical and Peaches saying 'jack me (till I start to scream)'. Hoping is the new 12inch from this record, with new remixes added to the original version.

Music, Hoping (extended version), and Hear My Song! give a one two three knockout punch to this record. They are my favorites, along with the last cut, One Night In Rio.

One Night In Rio has Louie in story mode, telling about a traveling adventure he had. I really like his stories. I loved the tracks on Consequences when he would spin a yarn on top of the killer music.

Louie Austen in the gullbuy: