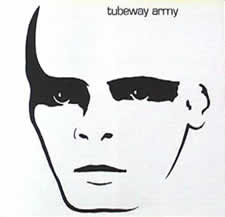 After fronting London band Mean Street in 1977 (their song Bunch Of Stiffs appeared on the Live at the Vortex compilation, and was the B-side of the Vortex 7'), Gary Webb rechristened himself 'Valerian' and put together a trio with his childhood friend Paul Gardiner (playing bass as 'Scarlett').

Soon after, the ultra-cool Tubeway Army LP was released on Blue Vinyl. Between the 2 singles and the LP Tubeway Army became many peoples favorite band. Valerian changed his name to Gary Numan, changed his instrument from guitar to Mini-Moog and started his ascension to major stardom, peaking with his Cars single a few years later.

The Blue Album is no rough beginning: I like this record best even after all these years. It was made before all the sci-fi imagery started. It is an honest record that was the UK counterpart of Johnny Thunder's Heartbreakers. Within a few years Gary's best friend Paul would sadly be dead of a drug overdose and Gary's Dad would become his tour manager. Gary would alter his references from solitude seeking dope freak to alien space man.

The song OD Receiver would be removed from the second pressing of the Bombers single (a double pak was made of the first 2 singles) and the name Tubeway Army would be dropped in favor of Gary Numan. But this record remains, filled with unstudied genius. The drug experience hasn't been romanticized better than Tubeway Army did in My Love Is A Liquid, Steel and You, or My Shadow In Vain.

And sex... While Buzzcocks sang Orgasm Addict, Tubeway Army sang an ode to sperm cells that die after self sex called Everyday I Die, and to attempts at bonding in Jo The Waiter.

Tubeway Army also had songs quoting such authors as Philip K. Dick. Listen To The Sirens opens with the line 'Flow my tears, the new police song', directly lifting from the title of the Philip K. Dick book Flow My Tears,The Policeman Said.

This record is gospel, and it has direct ties to the synthcore scene happening today. This edition of 'Tubeway Army' has 13 live songs tagged onto the end, from a 1978 set at The Roxy in London. My favorite of the live songs is a cover of the Velvets song White Light/White Heat.

The Blue album tied together ends that had not been attempted at its time. David Bowie's voice, punk's energy, and Liquid Sky fashion came together inside a set of incredible songs that hold full strength today.