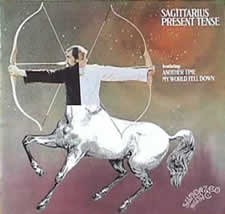 Originally released in 1967 and reissued by Sundazed in 1997, the Sagittarius album Present Tense is considered a classic of experimental pop music.

Back in the 60s - if a single did well in the charts it was then time to record an album quickly and get it out on the market. This led to many studio groups being created after the fact of a hit. Sagittarius was one such project, in a way.

Created by Gary Usher, who had been working for years in the surf music and Folk rock vein having produced The Byrds, Gene Clarke, Chad & Jeremy, The Millennium and The Peanut Butter Conspiracy, was inspired by The Beach Boys Pet Sounds album and in particular the single Good Vibrations.

He decided to go in the studio inbetween his major production projects and work on a solo outing of his own. Stemming from one song that Chad & Jeremy had rejected, My World Fell Down was a meisterwork in Usher's hands, with vocal melody, oblique sections and experimental noises, all combined into a 3 minute single that actually charted at a high of 70 in the national charts.

To really hear the brilliance of this track, one must check out the single version included here as a bonus track (#16). A less exciting but still intriguing version was included on the album (#7). The difference between them was a middle section of found noise that Clive Davis did not like and had removed.

To help Usher out on most of these tracks are Curt Boettcher (of The Millennium), Bruce Johnston (soon to be a Beach Boy himself), Glen Campbell, and the Firesign Theatre.

Not only do we end up with a a record that is gorgeous beyond belief - an album that the listener should let wash over them and let go of your mind rather than sink your teeth into this hook or that hook - but an album of extreme texture. It's like the beautiful people have taken over and you can only allow it to happen as if in a dream and your hands are tied.

If you don't know what I mean by this check out the NEXT single that Sagittarius put out called Hotel Indiscreet (track 17). This track was arranged by Boettcher - and has his insane stamp all over it. The Firesign Theater intrusion in the mid-section of the song mixing a Nazi marching command with a 60s hip quip is quite fitting and hilarious in the context of this cd. The fact is it's blasphemous and yet they get away with it - this is sunshine pop afterall isn't it?? We take only your cash here, no checks or credit cards.

An incredible Sandy Salisbury song is included here - Track 18 Lonely Girl - and this will fit in perfect with an upbeat modern indy pop set or next to Margo Guryan. When all's said and done, this disc fits in cozily next to the Millennium/Sandy Salisbury discs reviewed in the gullbuy last year (in fact there are some of the same songs!) and if you dug into those cds than this one should be in your record bag too.

related discs in the gullbuy: