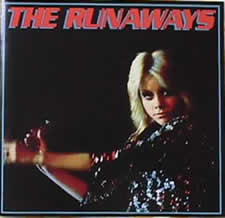 Like the Kennedy assassination and the Tate-LaBianca murders, the full truth about the forming of The Runaways will likely never be told.

Too many people have too many different ideas of what went down to agree on one official story. One thing I know for sure is that the band fuggin' rocked! (And let me clarify -- not 'they rocked, for teenage chicks,' they rocked PERIOD.)

Some cuts might have a wee bit more '70s boogie and choogle than I would normally play on the air, but who can deny the sheer brilliance of their signature song, Cherry Bomb.

Other great tracks are Is It Night or Day, Lovers, the cowbell inflected take on the Velvet Underground's Rock and Roll ('I got a fever! And the only prescription.. is more cowbell!'), American Nights, and when the DJ needs a bathroom break, why not throw on the epic (and hilarious) Dead End Justice, which clocks in at just under 7 minutes.

I realize many people turn up their noses at this album; like my mom always says, 'That's what makes horse races.' Whatever that means.