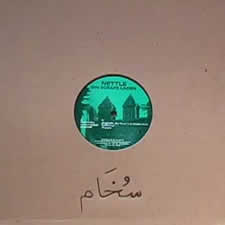 Nettle are a duo from Madrid. DJ Rupture is one of the fellows. 'Bin Scrape Laden' is a six song 12' with a broken beat hardstep remix by DJ Scud.

Scratched into the vinyl are the words 'Are you carrying anything that could be considered a weapon?'.

Some people might consider this music a weapon. It challenges without being a senseless bludgeon. It is sophisticated and different. It took me many listenings to decide what speed it was meant to be played at! (I decided 33)

Nettle use samples, but manipulate them so they are not just collaged, they are transformed. Though this is 'difficult music' it is worth the effort. Nettle's sound is very similar to DJ Rupture's material under his own name.

If you've got an open mind and want something new (guaranteed) I'd say give this a shot.