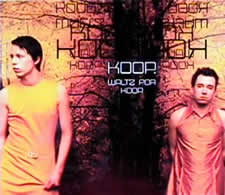 Koop are a duo made up of two guys named Magnus and Oscar. They have been gigging the Swedish jazz underground since 1995, when they released their first EP while still studying at the University.

Their name means 'cooperation' in Swedish. Cooperation is what 'Waltzing For Koop' gives us: Koop receive the cooperation of several great vocalists on this very vocal oriented disc with a strong 70's Polish Jazz sound.

Yukimi Nagano sings on 'Summer Sun' a lot like the Polish jazz artist Eva Bem. Much of this record has a timeless quality. I think this is why others have compared Koop's sound to Burt Bacharach before. At other times Koop remind me of Austrian artist Seelenluft. 'Soul For Sahib' has the duo using the same type of speaking voice that Seelenluft have used in the past.

The sound on this CD is gorgeous. Koop say that they want their sound to be called simply 'jazz', not 'nu-jazz', 'future jazz', 'funk jazz', 'acid jazz', etcetera. I'm fine with that, except for the fact that I would not have heard this disc if it was represented as a straight jazz disc.

The fact that Compost's 'Jazzanova Compost Records' division have released it will automatically bring Koop to the attention of a large audience outside of traditional jazz, so I guess what they want to call their sound is superfluous to the quality of many of the songs on this disc.