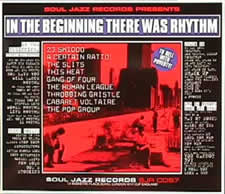 Beneath the grooving veneer of almost every Soul Jazz release is a bold political declaration. Music can be many things, but for the silenced and the disenfranchised, music can become temporary liberation.

The blissful experience of Soul Jazz's latest compilation, In the Beginning There Was Rhythm, featuring some of the most prolific singles from the golden age of UK post-punk, is implicitly due to Soul Jazz's musical archiving turn full circle.

There's nothing undiscovered here. I imagine the original 45's of many of these tracks are collecting a fine dust coat in the basements of many deejays in the twenty years after their original release. Yet, as a whole, there is something so universally affirming in the spirit of these songs that so many of us consider sacred that I think gets overlooked because these bands form the backbone of our own musical identity.

Rather than stand and fight, like many of their punk forefathers, the artists on In The Beginning choose rhythm as their rifle. From the ecstatic drumming on 23 Skidoo's gamelan-infused 'Coup' (trk2) and 'Vegas El Bandito' (trk10) to Gang of Four's riotous declaration, 'To hell with poverty. Let's get drunk on cheap wine,' In the Beginning not only celebrates the injection of UK punk ethics with soul and groove, thriving with an unimagined Anglo sexiness, but an a kind of romanticism comes to bind all of these tracks: a belief in a revolution on the dance floor and in the bedroom (check A Certain Ratio's 'Shack-Up').

The popular adjective for this compilation is essential. And while the delights of In the Beginning abound: its sheer danceability, its undeniable relevance to today's music, present in Human League proto-electro and the sound tampering of Caberet Voltaire and This Heat, it carries a radical dimension all its own.

While the most stellar tracks (Pop Group's 'She Is Beyond Good and Evil', the A Certain Ratio and 23 Skidoo songs) borrow musically from black music, there is also an idealogical harmony between In the Beginning and the other Soul Jazz compilations.

Before punk, before Thatcher, before the Queen, there was rhythm.