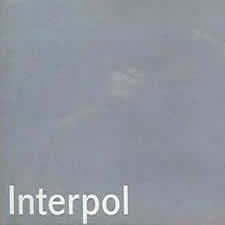 The Interpol CD was brought to my attention by some friends of mine who work at the Washington Square Tavern. When the main owner's not in, the bartender and chef take over the stereo and it's a very good thing.

One night, this song came on I had to start prentending to pay attention to the conversation I was in. Then when the next song came on, I was just nodding 'uh huh ... yeah ... '

By the third song , I had to exuse myself, approach the bar and get the lowdown on this band. No one knew anything about the band but the chef played it knowing I'd like it and knowing it would be a matter of time before I'd be at the bar asking questions. I went out to a record store the next day. Much to my dissappointment, this 4-song cd (the one I'd heard) was all that was available.

The band hail from New York City (or Brooklyn, not sure). They're a 4 peice band that sound heavily influenced by the likes of Joy Division and possibly, a bit by My Dad is Dead. Their songs and some of the guitarwork contain similarities to some of the more rocked up Bedhead songs but replacing the world-weary deadpan-ness with more melody and emotion. The vocals remind me of My Dad Is Dead.

This was my reaction to the first two songs - Good stuff, lots of potential. Then the 3rd song 'PDA' came on. 'Good stuff' gradually became 'holy s#*t!'. Then, about 3/4 into the song, they stop and let into this guitar interplay crescendo that I still can't enough of.

Since then, song 4, 'A Time to be Small' has become my favorite. It's different direction from the rest of the ep. It employs some cool spoken word effects, piano, and some of the most beautiful chiming guitar lines and rythymic intensity I've heard in a while. I'm still blown away by it. They don't re-invent rock and roll. It's nothing THAT new. Just an intensity, and pulled-off complexity that's been missing from a lot of rock lately.

They have an impossible to find12' that was released on Chemikal Underground . The domestic CD version of theChemikal Underground 12inch 'Fukd ID' (featuring different versions of 'PDA' and 'Precipitate' and two more songs) is also out of print. Those other two songs are both listenable from their website.

They've appeared on two compilations, 'Clooney Tunes (Fierce Panda, UK) and 'This is Next Year : a Brooklyn-based Compilation' (Arena Rock, US) Definitely a band to watch for.