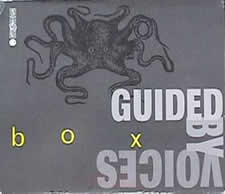 As huge as this band was in the mid to late-'90s, it's always bothered me that the gullbuy didn't review this 1995 release. When it showed up used in the store I work at I made sure that Carl grabbed it.

Those of you who know the band, know the band, and those of you who dislike 'em are sick of hearing about them so I'm going to stick with the facts: This set compiles the band's first four (impossible-to-find) albums from 1987-1990 and adds an extra CD of previously unreleased material from 1988-93.

It's mind-boggling to think that, while they didn't receive much notice until 1994's Bee Thousand, what made them such a great band was already in full-effect from their first full-length, released SEVEN YEARS earlier!

Every one of those early albums includes tracks as stellar as anything the band ever released. And the extra disc, King Sh*t and the Golden Boys, has plenty of winners, too.

I promised myself I'd keep this short so I'll sum up thusly: an amazing set by an amazing band. Listening to this made me remember how much I love these guys. God bless you, Robert Pollard!

images of the covers of each CD in this set: