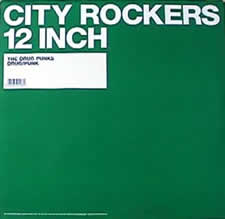 The Drug Punks are JJ Clam and The Wurlitzer, from Cancun Mexico.

This is their debut release, appearing on City Rockers, the East London label in the limelight with Felix Da Housecat's new record.

Darn shame that the A-side can never be played on the radio due to the curse-ridden sample the song is based on.

The B-side has a driving electronic punk song that has vocals blurred into unintelligible sound by an effect. The track is very good - it is the reason I bought this 12inch (I listened to both sides in the store and already knew I had to write off the A-side). 'Punk' reminds me of how The Psychedelic Furs song 'Pulse' would sound just as you were going under after being administered General Anesthesia.