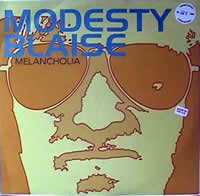 I first spied this record early in the spring on vinyl. I figured that I'd wait for the CD version to appear, but it has never crossed my path to this day. When I located this copy the other day, I decided it was now or never, and put it into the gullbuy bag.

Melancholia is a strange record. I really loved the A Beginners Guide to Modesty Blaise full length and its follow-up (the Uranium Girl EP) but this record is only just OK.

It sounds like they changed idols from The Monkees to Gorkys Zygotic Mynci. I love Gorky's too, but it is one thing to be influenced by them, and another to write the jewel-like songs Gorky's do. Melancholia is bogged down by too heavy handed of a feel, and not enough sparkling songs to carry it high.

Looking back on that debut LP, the opening cut of 'A Beginners Guide to Modesty Blaise' was the song Let's Get Together, a great song that shared the same title and a similar feel to a song from Gorky 5. It now looks like that was more than coincidence.

On the positive side, there are 3 songs I really like on Melancholia. Pretty Smart On My Part (B1) is an ace of a song about changing your major and choosing courses at school just to sit next to a girl you like. Chorale (A1) has the strength you expect from the leadoff song on an album, and I'm Going Out (B5) is a good song.