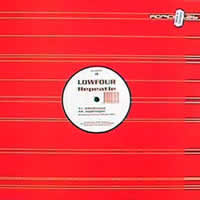 There are 4 songs on this 12" Andreas Tilliander recorded as Lowfour.

Andreas Tilliander is an artist from Stockholm Sweden who has recorded under many names. Some of these names include Mokira and Komp, though these names mean nothing to me.

He has the Ljud full length on Mille Plateaux, released under his own name, as well as the track Vibetan on 'Clicks and Cuts 2'.

He calls his music "click hop". His music sounds very new and interesting even in these electronically saturated times.

For me the standout track is Jagarvegan (A2), though all 4 tracks made me want to buy this 12" when I listened to it in the store.