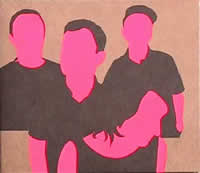 Valérie Leulliot's vocals are beautiful and captivating, at times, but, overall, their new material doesn't strike me as strongly as some of their earlier work (I've never gotten tired of Chanson sans issue off Immobile).

During the winter of 2000-1, Autour de Lucie assembled various European musicians (mostly obscure; the majority live in Paris) for remixes of songs off Faux Mouvement.

1. Radiostatic - Chanson de l'arbre (Tree Song) Radiostatic is a Parisian duo that mixes house, dub, and ambient melodies. On Faux Mouvement, this song sounded morose and dismal with heavy emphasis on piano and slow, melancholy vocals. Radiostatic's version uses robotic-sounding vocal effects, steady drum-n-bass beats, and some nice record scratching. The strings are used in a more effective, lush way, layered underneath the drum beats instead of dominating the song in its entirely.

* 2. Gonzales - Chanson de l'arbre (Tree Song) Even though Gonzales has been living it up in Berlin for the past couple years with the folks at Kitty-Yo, he can't hide his Canadian roots. His beats definitely have a smooth, groovy style, using strange, funky staccato beats and an egg-shaker-sounding rhythm that is absolutely infectious. I love how he adds a lot of humor into his music by adding hilarious French-Canadian rap! It's a great juxtaposition with Valérie's sweet, yet moody vocals. Highly recommended!

3. Moore:Music - Je reviens (I Return) London's Moore: Music remixes the opening cut to the album. The original has a definite sad, fatigued mood to it with lots of over-the-top string arrangements and gentle guitar melodies. This version starts with simple synths and some staccato beats. It doesn't really get interesting until about 4 minutes into it, when louder beats kick in.

4. Sporto Kantes - Mercenaires (Mercenaries) Like Radiostatic, this duo is also from Paris. But in this case, SK is known for their groovy dub sounds. Their take is a jazz-influenced track, using a stand-up bass, quiet piano chords, and gentle drum beats (using brushes, of course).

5. Money Penny Project - Je reviens (I Return) Money Penny Project is the project of Neoit Bollin, who has previously worked with The Hacker (of Miss Kittin & the Hacker fame) in Grenoble. This track begins with subtle heavy breathing and loud, weighty beats. Then a church organ kicks in unexpectedly and slowly mixes with the electronic beats and strings. Again, most of the vocals have distorted effects on them. The layering is really great on this song. I prefer this interpretation to Moore:Music's (track 3).

* 6. Tarwater - La contradiction (The Contradiction) Gonzalez's label mate, Tarwater (which features Ronald Lippok of To Rococo Rot), also adds its own mix. In my opinion, La contradiction is one of the stronger tracks on Faux Mouvement. It has a smooth jazzy rhythm, which is also driven by electronic beats that is somewhat reminiscent of Thievery Corporation. Tarwater's take is tranquil and ambient. The vocals are not manipulated at all. About 2 minutes into the song, the duo mixes in light beats, which are just loud enough that the vocals still stand out and the strings are not completely hidden.

7. San Sebastian - Je suis un balancier (I Am a Pendulum) This version sounds darker, more mysterious than the original. I like how San Sebastian (from Toulouse) uses dissonant piano melodies to create an unsettling mood.

* 8. Analog Bronca - La condition pour aimer (The Condition for Love) Another one of my favorites off this compilation. Analog Bronca uses loops and really interesting filters to distort the vocals in a way that make them sound very robotic, and the lyrics become indecipherable. I like how the beats break at the end of each sequence. There's also a really great synth melody that rides above the beats. Brilliant. I like this song just as much as the Gonzalez's mix. These two songs are the reasons why this compilation is excellent. I want more Analog Bronca!

9. Sodex - La contradiction (The Contradiction) This interpretation has a trendy, relaxing down tempo feel to it. This could easily fit into the Hôtel Costes series or a Groove Armada-type mix. This rendering is smooth and groovy, but nothing really extraordinary.

10. Isolée - Lent (Slow) Isolée gives Lent a house/techno approach. Like track 9, nothing amazing, but still fun and upbeat. There are some nice transitions into faster rhythms. Generally, I think the vocals distract from the music itself. 9 ½ minutes long.