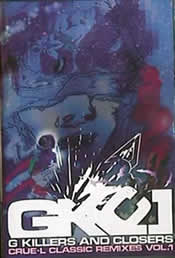 Many people have not been able to get past the childlike nature of J-pop. It seemed too cutesy. G Killers and Closers removes all the 'easy' and hyper samples from J-pop and replaces them with more adult sounds resembling nothing so much as "J-house".

There are very modern beats and sharp edged sounds on vocal and instrumental cuts on this double disc set. The first CD has all the remixes proper, and the second disc has a turntable mix by Kenji Takimi with the songs from disc 1 (plus a couple more).

My favorite cut is the Cornelius remix of Family by Crue-L Grand Orchestra feat. Ellie. The turntable mix of the song (on disc II) puts everything special about this CD into one song.

On disc 1 I like the Buffalo Daughter mix of Ellie's Merry Go Round (with Star Trek samples), Towa Tei's mix of Kahimi Karie's Superfreak, and Little Tempo's totally dubbed out mix of Eli + Hiroshi's Sun Is Mellow Like A Tangerine.

On the second disc I like the Cornelius remix of Family by Crue-L Grand Orchestra feat. Ellie (as previously mentioned), Takuji AKA Geetek's Mensole Of Sound, the Kahimi Karie remix, and the remix of Ellie's Stitches In Babylon.

I was surprised when I opened up G Killers and Closers. Where I expected to find a double disc of J-pop nuggets, I found the underground of Japanese dance culture right inside my CD player.