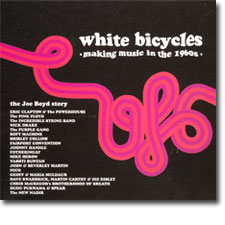 This compilation, which is also a companion piece for a book with the same name, does a fine job of presenting Joe Boyd's eclectic production work from the 1960s. An American, originally from Boston, who did this production work in the UK in the 1960s, Joe Boyd is best known from that time period for his work in the UK folk scene that was blossoming then (with Nick Drake, Vashti Bunyan, The Incredible String Band, and The Fairport Convention), but Boyd also produced the early Pink Floyd single Arnold Layne, the supergroup The Powerhouse (which featured Eric Clapton, Steve Winwood and Paul Jones), and The Soft Machine. Boyd also was an early progenitor of the world music sound, starting his own world music label called Hannibal which is now part of Rykodisc (Dudu Pukwana & Spear, Chris McGregor's Brotherhood Of Breath, and Geoff & Maria Muldaur show the world music inspiration here). Eventually, Boyd produced Richard & Linda Thompson, 10,000 Maniacs, R.E.M., and Billy Bragg but this music is not featured here.

The bulk of this compilation centers on the UK folk work Boyd produced through his production and management company Witchseason. This includes work by The Incredible String Band, The Fairport Convention, Shirley Collins, Nick Drake, Johnny Handle, and Diz Disley. Highlights are definitely the tracks by Nick Drake from his albums Five Leaves Left and Bryter Layter, (Way to Blue and Poor Boy, respectively), and Come Wind Come Rain from Vashti Bunyan's Just Another Diamond Day album.

For those interested in Boyd's psychedelic connection, thanks to his co-founding the UFO Club in 1966, one of the venues in the UK for psychedelic music, there's Pink Floyd's Arnold Layne (their first single), The Purple Gang's Granny Takes a Trip (The Purple Gang were actually jug band revivalists, but their version of Granny Takes a Trip is decidedly psychedelic), and The Soft Machine's She's Gone (a single that went unreleased until it was compiled on a Soft Machine compilation in 1977).

There's also an early version of Crossroads by the Eric Clapton supergroup, The Powerhouse, a group many Clapton fans don't even know about since they only released 3 songs on an Elektra Records sampler called What's Shakin' in 1966.

One of my favorite tracks is Afraid from Nico's Desertshore album, an album co-produced with John Cale that shows Nico's Germanic harmonium style to perfection.

For the world music sounds, check out the jazz blues influenced Church Mouse by Dudu Pukwana & Spear (which features Richard Thomas on guitar and was only ever released in South Africa), the afro-jazz improv of Andromeda by Chris McGregor's Brotherhood Of Breath, and the wonderfully exquisite Geoff & Maria Muldaur recording of Brazil (the Ary Barroso song) which was later featured in Terry Gilliam's film Brazil, and will have you whistling the tune by the end of this disc.