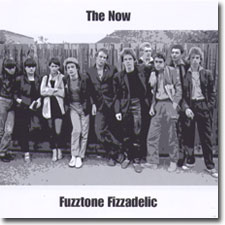 The Now were a London 1977 punk band that few people remember, as they only released two 7inch singles in their career.

The record opens with guitarist Steve Rolls playing a fast Ramones or Spiral Scratch era Buzzcocks styled guitar riff. Then vocals come in that sound like TV Smith of The Adverts. Why? is an incredible track, good enough to justify buying this CD for.

The next song Dev Corp (Development Corporations) starts with echoed guitar kind of like Generation X used on the dub version of Wild Youth. Once again, this song is literally fantastic. There is a second version of the track on the disc (#13 - DC77). The second version is also a studio track, and is also great.

These two songs made up the self-financed 7inch the band put out on ultimate Records in November 1977. They were originally from Peterborough, but moved to London and became part of the London scene by playing a lot at the Vortex.

Labour Party continues with the Buzzcock's styled phrasing. It is a good track, but not stellar like the first two. In fact, all the non-singles songs can be grouped together as competent studio records, but unexceptional, with the exception of Office Worker, which is as relavant today as it was then, and has great music and lyrics.

Tracks 7 and 8 make up the second 7inch the band put out. Into the Eighties b-w 9 O'clock came out on Raw Records in November 1979.

Into the Eighties shows vocalist Mike McGuire singing a little more melodically, and the guitar has an effect on it. Just like The Adverts, The Now were trying to change with the times. The results were not memorable, and the song has not dated well due to the lyrics.

9 O'clock is much better. It is not as strong as their first single, but is very good, sounding like The Adverts once again.

The CD has an unlisted fourteenth bonus track, and it is a great studio track with vocals.

As Damaged Goods prices their records reasonably, this CD IS worth buying just for the first two songs and the B-side of their second single. I am glad they released this disc!