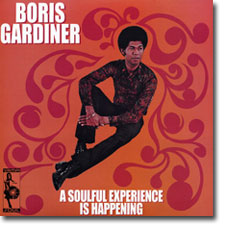 Boris Gardiner was a member of Lee "Scratch" Perry's band, The Upsetters (you can hear Boris Gardiner playing on Junior Murvin's Police & Thieves). A Soulful Experience Is Happening on Vampisoul features his first two solo albums, A Soulful Experience & What's Happening, both released in 1970. It's a fine companion to I Want to Wake Up With You: The Best of Boris Gardiner on Trojan from 2004 (which highlights his solo material, and his work with The Love People, The Happening and The Broncos) because there are only a few songs on the Trojan set from these two albums.

Boris Gardiner wore two hats in his career: reggae session musician and lounge music crooner, and both styles are featured here. The reggae sides have a sweetly paranoid feel to them, while the soul sides are in a Marvin Gaye (circa What's Goin' On) vibe. There's also some choice instrumentals, which are some of the finer cuts here. Boris also cut an equal number of covers and originals.

The best of his originals is Happiness Is A Warm 'Pussin', which really is an instrumental with brief female vocals singing "Happiness is a warm 'pussin'" while Boris meows every so often.

Also, the opening instrumental, What's Happening, also written by Boris is a warm, inviting reggae influenced tune. Other fine instrumentals include Melting Pot (also penned by Boris), and the soulful blend of Breezin' (a Bobby Womack tune, which was also covered by Gabor Szabo on his High Contrast album).

Soulful Experience Is Happening is also filled with Boris singing cover tunes, the best of which include fine readings of Ain't No Sunshine and Let's Stay Together, both with a warm, soulful vibe.