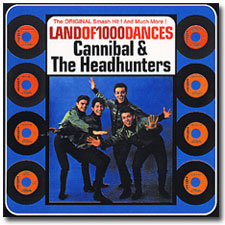 Varese Sarabande and Vampisoul have been battling it out, documenting the Latino sound of East LA from the 1960s, and this Cannibal & the Headhunters collection is no different. In fact, it looks like both labels reissued the exact same disc with different cd titles, but the same songs, and even the same bonus tracks.

Like many reissues these days, newly created unreleased stereo versions were used for the bulk of this cd (for the album portion), but having the music in one speaker and the vocals in another lacks the punch of the mono bonus tracks. Also, some of the best tracks here have been featured on cd compilations like Pachuco-Soul! - A Collection Of Vintage East LA Grooves From The Vaults Of Rampart Records http://www.gullbuy.com/buy/2006/3_8/pachucosoul.php and Varese Sarabande's four volume series The West Coast East Side Sound.

A few tracks don't appear here at all, including Headhunters Dance Party and Zulu King, and versions of La Bamba and Mockingbird (all of which can be found on the Collectables collection Golden Classics), maybe because these were recorded at a later date (what's here was recorded for Rampart Records in the mid 60s, while the group later signed with Date and Capitol Records in the late 60s), but missing these songs makes this disc not nearly as definitive as it could be.

Cannibal & the Headhunters are best known for recording the original version of Land of 1000 Dances (Naa, Na, Na, Na, Naa) which was later a big hit for Wilson Pickett. There's two versions here, and the mono long take with its gospel influenced introduction is the winner.

A few tracks are here from Rampart Records songwriters Chick Carlton and Larry Tamblyn, including Devil in Disguise (a Hit the Road Jack kind of song), Strange World (both written by Chick Carlton - Strange World was also recorded by The Majestics and can be found on West Coast East Side Sound, Volume 3), and Here Comes Love (a ballad written by Larry Tamblyn, which was also on West Coast East Side Sound, Volume 3). You can hear other songs written by Carlton and Tamblyn on the Pachuco-Soul compilation as well.

Some cover songs that don't work quite as well include, The Boy from New York City (The Ad Libs), My Girl (The Temptations), and Searchin' (The Coasters) because they pale in comparison to the originals and don't add anything new.