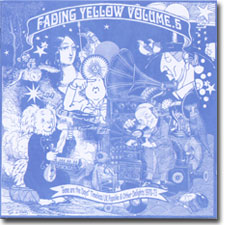 Not unlike ZigZag - 20 Junkshop Soft Rock Singles which was part of RPM's Lipsmackin' 70s series, Fading Yellow delves into the softer, underbelly of early 1970s British pop from 1970-1973 on Volume 5, Gone Are The Days. Vol. 5 picks up right where Vol. 4 left off with more "Timeless UK Popsike & Other Delights". If you've ever wondered what happened with the harmony and sike-pop artists like Billy Nicholls or Micky Jones And Tommy Brown (aka The State Of Micky And Tommy) between the hazy days of the 1960s and the glam and punk rock era, then Vol. 5 of Fading Yellow is a great place to dig. This is the world half way between brittle 1960s harmony pop like Harmony Grass, the early 70s singer/songwriter music of Nick Drake and the glam power of David Bowie. If bands like Almond Marzipan, Angel Pavement, or Design or singers like Abel Fletcher or Richard Barnes sound interesting, then the days gone by have returned.

Because Fading Yellow Vol. 5 delves into the 1970s, it's the most unique of the Fading Yellows that I've reviewed. And because the 1970s sound is a new beast for me to like, being only a dabbler into the British early 70s sound, I have found myself enjoying this volume quite a bit. I'm not sure how well this would stand up though for the 60s collectors or the modern rockers.

The first track by High Society called Tell Me How was written by Tony Hazzard. Tony Hazzard also wrote Ha! Ha! Said The Clown and Fox On The Run for Manfred Mann (check out The Ascent Of Mann 2-cd set for these goodies), Hello World for The Tremeloes, Listen To Me for The Hollies, and Me, The Peaceful Heart for Lulu, as well as recording his own sought after album Tony Hazzard Sings in 1969 which includes his own versions of these songs. The High Society track Tell Me How definitely has that turn of the 70s decade sound found on Tremeloes recordings from that period - sort of that hard rock meets the singer songwriter sound.

Angel Pavement have a great name - they took it from a J.B Priestly novel from 1930. Their song When Will I See June Again has a great late 60s baroque and Brit sound that was produced by Geoff Gill from the UK band The Smoke. It looks like an unreleased album called Socialising by Angel Pavement has been issued on Tenth Planet in 2003 that includes this song as well as covers of the Iveys' Maybe Tomorrow and Spirits' Water Woman. From these two songs, I'm now highly curious to hear the unearthed gems of Angel Pavement.

Mike Batt wrote the song that this whole series is named after (Fading Yellow) whch was included in Vol. 1. Well, here he is again with a Wombling like song called Wendy which has a sweet sound to it.

Summer Of Miranda by Toast has a Bryan Ferry styled warbling lead vocalist which is fitting since they later became Sailor who sound a lot like Roxy Music. This song was the b-side to the Paul Simon cover of Flowers Never Bend With The Rainfall and was released in 1969. It was produced by Tony Cox but sank without a trace, so Toast changed their name to Gringo before forming Sailor.

Forever Autumn by Vigrass And Osborne (Paul Vigrass and Gary Osborne) is the original version of a tune found on the Queues album (now out of print) that featured Jeff Wayne on synthesizer. The tune later was included on Jeff Wayne's Musical Version Of The War of the Worlds on Columbia Records where it became a hit with Justin Hayward of The Moody Blues singing. Gary Osborne had previously sang lead vocals on No Way Out by The Chocolate Watchband while Paul Vigrass was later part of Quasar. This tune sounds like a theme song to some dreamy space opera.

Design released some great harmony folk pop albums including their self titled debut from 1971 and Tomorrow Is So Far Away in 1972. Minstrels Theme is from their debut and is a great example of this 1970s harmony group. They got help from the likes of Clem Cattini and Chris Spedding on backing - but it's their farout harmony vocals which help them on their originals (like this one) and their covers like their version of Strawberry Fields Forver (not included here).

Almond Marzipan's (another great band name!) Summer Love has a Stormy groove going and was a tune also recorded by Thomas & Richard Frost.

Abel Fletcher's You Wont See Me Go sounds just like The Beatles' Blackbird. His Esmeralda track sounds like a good song but is kind of distorted here.

Come Away Melinda by Cats Eyes (a version of the Tim Rose song which was covered by the likes of Harry Belafonte, Judy Collins, The Big 3, Bobbie Gentry, Mamas & The Papas, Kenny Rankin, Barry St-John, Uriah Heep, UFO and The Weavers) is one of many songs by this prolific group from Evesham in Worcestershire.

Marvin Welsh And Farrar (Hank B. Marvin and Bruce Welch from The Shadows) released the moody Tiny Robin in the early 1970s as a b-side and album track from their second album called Second Opinion. Having nothing to do with The Cowsills tune The Rain, The Park & Other Things - The Rain The Wind And Other Things by The Playground (who also had The Girl Behind The Smile on Vol. 4) is a soft pop delight. Trees And Things by Maxwell And Nicholson sounds a lot like Jefferson Airplane with electric keyboards. Alice by Micky Jones And Tommy Brown (aka The State Of Micky And Tommy) is an Alice in Wonderland themed song which rounds this compilation out.

Fading Yellow in the gullbuy: