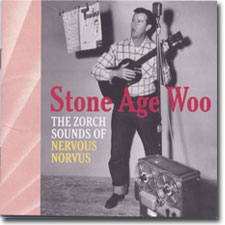 Nervous Norvus was Jimmy Drake, a truck driver turned songwriter who became inspired by Oakland CA radio legend Red Blanchard. Red Blanchard had a half hour novelty show which started in 1950 at KCBS and continued through the late 50s in LA's KCBS.

Red Blanchard created a slang he called 'Zorch', which Jimmy Drake appropriated out of love for Red Blanchard. He started sending Red demos he recorded in tribute to his hero. When he sent the song Transfusion in 1956, Red told him to stop thinking about giving stuff to his hero, and to start thinking of himself as an artist. Red added car crash effects to the Transfusion demo, played it on his show, and quickly ended up helping Jimmy Drake get a recording contract with Dot Records.

Choosing the name Nervous Norvus based on the Zorch worked for cool (nervous) and a word that rhymed with it, Nervous Norvus put out three singles on Dot. Coined 'the Dot six' by outsider music aficionados, these singles are classic

Jimmy Drake supported himself during his life (he died in 1968 of cirrhosis of the liver due to alcoholism) as a correspondence writer, recording mail order songs for aspiring songwriters responding to magazine ads with hand written lyric notes.

Aside from a few exceptions, his musical repertoire consisted of a tenor ukelele and a tapped foot on the mike stand for percussion. My favorite tracks on the CD are Transfusion, The Fang, and I Like Girls. I can't picture anyone not liking these tracks. For fans of outsider music, most of Stone Age Woo: The Zorch Sounds of Nervous Norvus will be very pleasing.