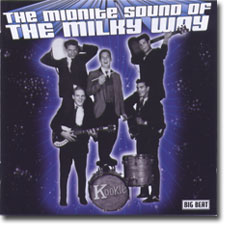 If you've ever wondered what the hayseeds of middle America might sound like when pounding out 1960s garage rock, then Midnite Sound Of The Milky Way is for you. Collected together from mostly unreleased material from the archive of the Midnite Sound recording studios in Danville, Illinois (200 miles from Chicago) by Alec Palao, this compilation serves to extend the depth of 1960s garage rock and features slabs of grit by Kookie Cook, Four A While, George Jacks, the Cobras, Willie & the Travelers, Dave Marten, the Grapes Of Wrath, Jack Johnson, and the 12th Knight.

Midnite Sound was best known for the work of Dean Carter, who released his music on the studio's Milky Way label. Dean Carter's mayhem has been spotlighted on the Big Beat anthology Call Of the Wild! and is probably a good place to start with this stuff. Midnite Sound Of The Milky Way digs deeper into the vaults, and while the results are not nearly as intriguing or talented, there's enough weirdness and garage rock here for those fans who really like to live in the times they revel in.

The Midnite Sound is an odd mix of raw low-fi studio trickery and an Americanized garage sound which makes the studio seem almost like a US garage version of Joe Meek's world. For anyone who's looking for the best of the bunch, Kookie Cook fires up his vocal chords on some tremendous Screamin' Jay Hawkins brand of garage on Workin' Man and Don't Lie. Kookie takes a dip into surf angst with Revenge and almost enters the outsider music realm. The Satelites join with Kookie on the frat inspired space instrumental Space Race and the throwaway nonsense of Space Monster. Kookie even covers Roy Orbison's Ooby Dooby (none too well) which points out the retro sound Midnite Sound would often veer towards at times.

The Grapes Of Wrath fuzz things up on The Shadows of Knight obscurity I'm Gonna Make You Mine. The 12th Knight also have a fuzz factor on the simple but effective Rebel Woman, while the fuzz on their instrumental Death Row seem to point to the future sound of the late 1960s. The Cobras have a youthful vibrance (thanks to being 12 years old) on the Beatlesque Try and the Yardbirds-ish Goodbye.

The highlights are few on Midnite Sound Of The Milky Way but I still found this a fun compilation to dig into for the odd garage sounds.