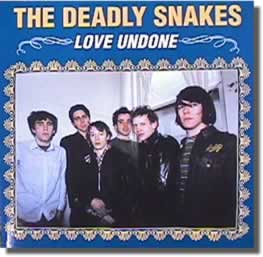 What's that you say? You're tired of bloozy rawk bands with naught but geetars and drums?

Look no further, friends. Toronto's (I know--can you believe it? Canadian, even!) Deadly Snakes do that raunchy rockin' blues thang with no fewer than SIX band members! (That's guitar/vocals, organ/piano, trumpet/harmonica, saxophone, bass and drums for those of you keeping track).

When they're not rocking the blues they're delivering great amped-up rock'n'roll ala Nervous Eaters (think 'Loretta'), or the Devil Dogs. Also makes me think of the Sonics at times. So nice! And the production (by Greg Oblivian) strikes a happy medium -- far from glossy, yet not so lo-fi that there's no bottom end and everything is louder than everything else. This record is HOT!

Though this album dates back to before the current bass-less craze (waaay back to 1999, kids!) they are still soldering on with the belief that people will like this kind of music even if you do flesh out the arrangements with other instruments. And you know what? People do.