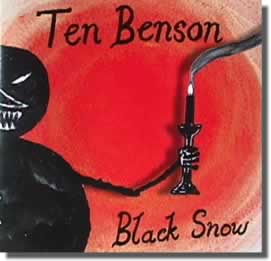 Sounding like a cross between Jim Caroll's 'All the People Who Died' and ZZ Top's 'La Grange,' Ten Benson's 'Black Snow' is not typical gullbuy fare. But Benny, Paul, Jonny, and Chris are jokesters who have a wit that comes through clear on the 2 full lengths and handful of singles Ten Benson have put out since gullbuy reviewed their debut single 'Rock Cottage' back in 99.

All three songs on this EP have a Christmas theme to them. 'Black Snow' is the most energetic and the standout track.

'Snowman-Snowgirl' is a pretty good track too with boogie guitar riff and John Bonham styled drumming below the lyrics 'I'm a snow man, she's a snow girl, stay together in a freezing world.' The lyric shows bring a smile to anyone who knows how hard it is to make a relationship work. At once the snow man/girl image is magical, but also fragile and dependent on the weather, which no one has control over.

Ten Benson in the gullbuy: