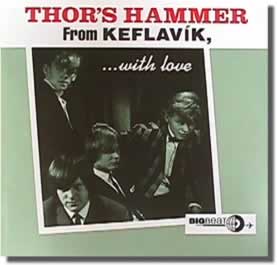 the Icelandic Beatles. that's what they were called in their native country and by the handful of people outside of Iceland who were lucky enough to have seen them perform. so, you're thinking, 'if they were held in such high regard, how come i've never heard of them before?'

there are many reasons why a band of such undeniable talent can remain virtually unknown outside of Iceland. a major reason would probably be the fact that the entire population of Iceland is only 300,000 people. that's right. that's three hundred THOUSAND. total. IN THE WHOLE COUNTRY.

another reason could be that there was no television yet in Iceland in the mid-sixties (when this band was around) in those days television was a crucial tool in exposure of rock n' roll bands. Icelandic teenagers perception of rock n' roll was based entirely on radio airplay (Iceland had only ONE radio station at the time!) and the occasional newspaper photo. foreign artists, of course, just did not tour Iceland back then.

the real name of this band is actually 'HJOMAR', which translates to the 'SOUNDS' or the 'CHORDS'. 'THOR'S HAMMER was a name they chose as an alternate persona, as the 'export' version of 'HJOMAR'. although they had wanted to sing in English from the very start, the owner of the first record label that they were on refused to release any of their songs unless they were sung in Icelandic. upon signing to a bigger label in early 1966, they immediately began recording songs in English. this, then, is where the name 'THOR'S HAMMER' comes in, they felt that if they were going to attempt to have any overseas success, they needed an English name. though deserved, this success unfortunately never materialized. now, through the courtesy of BIG BEAT Records, even though it has been thirty-seven years since their peak, the world has this CD to listen to and discover what they missed the first time around.

my favorite track here is 'i don't care' (track #2), a high-voltage pounder featuring punk vocals and an overload of fuzz guitar. guitarist gunnar thordarson was obviously very enamored of his newly purchased fuzzbox at the time!

almost as great is 'my life' (track #7) and the very energetic 'big beat country dance' (track #5) which feature more of gunnar's unrelenting fuzztone. (if you are starting to get the feeling that i like the sound of fuzz guitar, well, you would be correct) track #3, 'better days', has more of a 'beat' sound, but is no less enjoyable.

i think these four songs are the equal of just about anything coming out of the U.K. or the U.S. in the mid-sixties. let's hope this CD will find a few receptive ears and remedy the undeserved obscurity of this talented bunch.