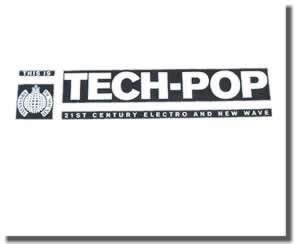 1. Fischer-Spooner - Emerge We're hit right off the bat with one of the best tunes on the compilation, with an extended intro which formulates into a 'feels good, looks good...uh-huh-that's-right's' state of mind. They pretend they are German but we all know they are from NYC. And what emerges midway through is a breakout female vocal to counterpoint the more low-key male vocals, which top it all off.

2. Console - Zero-Zero Computerized vocals which would make Kraftwerk proud, are just the beginning of what make this song such a treat, Console (aka Martin Gretschmann of Notwist) apparently don't always sound like this, usually veering towards less of a pop god voicing and more the IDM territory. Be treated.

3. Zoot Woman - Nobody Knows (Part One) Zoot Woman is so 80s pop, it's almost embarrassing to point that fact out, but somehow, the synths sound cleaner, purer, combining with the funk compelled bass and sweet harmonies.

4. Tiga & Zyntherius - Sunglasses at Night A cover of Canadian singer Corey Harts' 1983 hit, by Montreal based producer Tiga and Finnish deep house mixer, Jori Hulkkonen, updating the song for the electro crowd, computerized distorted vocals and serious rhythms, this somehow does not become a cliche maybe because it makes the words seem haunting and doesn't have any cheesey build-ups.

5. Soviet - Candy Girl A low-key retro piece which somehow combines Pulp electronics with more lowkey Factory-inspired vocals, it is both infectious and twee, to the nth degree.

6. Circ - Destroy She Said Reminding me of Altered Images, this track has a catchy-ass chorus, that could've been 80s cheese if it broke into a more over the top vocal- line, but instead remains pensive, with its sadly derived delivery, coupling a gently plucked keyboard piano-line, whispy background sighs, and the lead vocal.

8. Waldorf - You're My Disco (New Romantic Mix) Things really get synthy on this number, coupling synthy bass with slapping drums. A downer disco remix tune at 5:30 minutes, with some echoed 'radio' vocals building it up to the chorus and a Blue Monday styled break in the middle extends this one a little tediously.

9. Tomcraft - Overdose Computerized vocals and a rolling synth-line brings us that autobahn sound, it pumps but doesn't hurt.

10. Swayzak - State of Grace A refreshing break, State of Grace by Swayzak (James Taylor and David Brown) add an angelic female vocal which adds an almost goth- like feeling to this track taken from their album Himawari (which also features collaborations with dub poet Benjamin Zephaniah, Opus III vocalist Kirsty Hawkshaw, and vocalist JB Rose), they end up really reminding me of prime era Fortran 5.

12. Golden Boy with Miss Kitten - Rippin Kittin Things keep cookin' on high with this collaboration taken from the Golden Boy album 'Or' between Golden Boy and a monotone Miss Kittin as she intones 'Mommy/Can I go out and kill tonight/I feel/I feel like taking a life.' The album does seem weighed down with long instrumemtals, but this is a vocal treat.

13. Felix Da Housecat - Happy Hour This reminds me of Fortran 5, also, there seems to be a theme with that kind of thing these days. Been there, done that, would like to do it again, please. Spoken voice, perhaps during the more driven section along with the more varied rhythms updates that sound to modern times.

14. Crossover - Extensive Care A Chicks on Speed clone, done quite well. Crossover are a duo from NYC and they even have a whole album out called Fantasmo of this kind of thing, but somtimes the boy sings on that. They certainly aren't Prince, and are no Chicks on Speed, but we'll deal. Upon many listens this song could annoy, but one or two listens its fun.

15. FC Kahuna - Machine Says Yes Now this would warrant many a listen, FC Kahuna have it going on, with this trippy infectious breakdown female vocal come-on. The middle section is so perfect before the vocals come back in. Machines Say Yes...again and again, this reaches the echelon of faves for me.

16. Selway - Pozition The only instrumental on the compilation, one of the East Coast's most important producers, John Selway is able to cross many boundaries, by appealing to everyone and this was a definite favorite when I first played this disc thanks to the loopy synth and stop start drum track, reminding one simultaneously of old school funk and rap, which is the best elements of original electro.

17. Ladytron - Playgirl (Zombie Nation Mix) A remix of Playgirl that was also available on the single disc, somehow the original just seemed to work better for me.

18. Toktok vs. Soffy O - Go! This sounds like if someone were to remix Bongwater! Odd indeed, and it really didn't do much for me though.

19. Mirwais - Naive Song (Dave Clark Remix) This song definitely didn't do much for me, with the computerized vocals really getting on my nerves. I think the mix of guitars and drum tracks brought it down too.

20. FPU - Ocean Drive Sounding like its title implies, an oceanic sound is evidenced in the wash of keyboards. This track is taken from an EP called Crockett's Theme and it really does sound like it would've been used in Miami Vice!