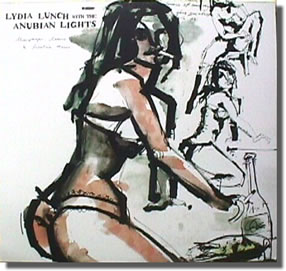 A long time ago I bought a 7inch called 'Orphans' from Teenage Jesus & The Jerks. It was a blast of energy that was more intense than The Pop Group or Mars '3E' single, yet more linear than the DNA single 'Ants.'

The 'Orphans' single remains untouchable. Since then Lydia Lunch (who fronted Teenage Jesus) has released many records and has become a cult figure. Dead Boys even wrote a song in her honor ('I Need Lunch') on their 'Young,Loud, and Snotty' LP.

Lydia Lunch has participated in many collaborations, and her work has spanned a handful of musical styles. In recent years her efforts have been concentrated into poetry readings. Her most commercial moment was the 'Queen of Siam' record she released in 1980 on Ze Records. It had a smoky cabaret kind of groove - very jazzy and cool.

22 years later the Los Angeles beat/lounge/pop nouveau act Anubian Lights have gotten Lydia Lunch to collaborate with them on a 5 song EP in the same style as 'Queen of Siam.' The results are better than you might expect. Lydia's voice is suitably trashed. At times she has the rasp of Marianne Faithful or Nina Hagen, while at other times she sounds pure Lydia.

Three of the five songs are great. 'Nothing But Trouble' opens up the EP in style, followed by the tile song 'Champagne, Cocaine, and Nicotine Stains.' The B-side starts off with 'Potato Tango,' then the less stellar songs appear. 'Guernicana' sounds like Combustible Edison. While I love Combustible Edison, I don't think Lydia knew quite what to do with this song, so her lyrical contribution is very subtle. The closing song 'Potato Tango (rmx)' removes Lydia from the track entirely and makes the song a competent but faceless Anubian Lights electronic/downtempo track.

On 'Nothing But Trouble' Lydia stretches like a cat that just woke up, almost like an Alphabet City Mae West. The song is completely fine, with upright bass, great lyrics and Lydia's amazing voice/presence.

'Champagne, Cocaine, and Nicotine Stains' is a statement of purpose for Lydia. Even though the title evokes the euro limousine world that Miss Kittin talks about, Lydia makes it sound more like a dream of someone whose reality is morning trips to the clinic supplemented by pills, and nights in dingy bars.

'Potato Tango' is my favorite track on the EP. It has real energy to it, and her voice wraps around the violin like trails of smoke. The disco-like buildup at the end makes the song even better.