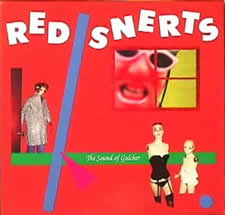 Remember back a little over 20 years ago when the New Wave was happenin' and it was actually kinda diverse? Power pop, ska, synth pop, punk, reggae and more could all comfortably fit under that one banner.

Well, in 1981, Bloomington, Indiana label Gulcher put out a compilation of local bands entitled Red Snerts (an anagram for Rent Dress, according to Ira Robbins -- I don't get it!), illustrating the diversity of the scene (I bet at least one member of every band included had 'Devo!' shouted at them from a passing pick-up truck by some thick-necked jock at some point).

The Defekts sound like the B-52's crossed with the Slickee Boys (great Kim Kane singing style, but did they have to cop that bit from Rock Lobster?),

A. Xax rocks the dissonant electro-art damage, E-in Brino is punky and great with their ode to 'Indianapolis.' There's also rockabilly influenced rock from Phil Hundley, driving punk from the legendary Zero Boys, new-wavey punk with bleepy electronic flourishes along with the buzzsaw guitar from Dow Jones & the Industrials.

Post Raisin Band is rockin' pop, Last Four (4) Digits check in with the only cover (Bo Diddley's Diddy Wah Diddy), Freddy & the Fruitloops play Two-Tone-style ska, Bay-Root kinda remind me of early Wipers, but more power poppy, and The Dancing Cigarette try their hand at No Wave/Pere Ubu skronk (do I detect a hint of Mission of Burma influence, too?).