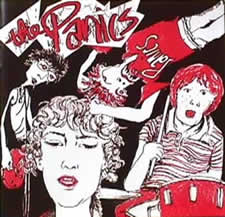 Rather obscure (high school-age) Hoosier punks, only in existence for a year or so (circa 1980), whose recorded output prior to this 2001 collection consisted of one 3-song 7inch and one compilation album track (see the review of Red Snerts).

Gulcher (responsible for all those Gizmos CDs kicking around now) took the four previously released songs and added fifteen live tracks from 1980, a demo recording by a Panics side-project, and four live tracks from a one-off reunion in 2000 and mashed 'em all together on one CD.

Despite the lack of original material (only five of the songs on this CD were written by members of the band) and overabundance of live material (not to mention the multiple versions of a number of songs), I still think you get good value for your money.

I recommend ALL of the studio tracks (I Wanna Kill My Mom, Best Band, Tie Me Up, Baby! (a Gizmos cover), Drugs Are for Thugs and Come to the Dogman's House (by Johnny ESAD & the Music Killers - including the Panics' singer & drummer).

The live stuff's not so bad either -- decent board recordings/spirited performances.