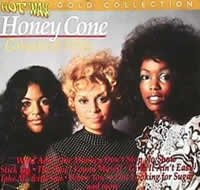 When you hear Want Ads and Stick Up you will probably recognize them. What you won't recognize are the faces of the singers.

Honey Cone were a studio project put together by famed Motown writers Holland-Dozier-Holland. The golden songwriting team never wanted us to fall in love with the singers - they simply wanted a vehicle for their songs that they had control over.

What makes this CD a gullbuy item instead of an oldies gem is the rest of the tracks. With the attention given to funk these days, you could do worse than put on a track by Honey Cone. True, these 3 gals are way more wholesome than, say, Betty Davis; but song/stories like The Day I Found Myself are as real as life.

My favorite tracks are When Will It End and While You're Out Looking for Sugar. If you like Motown or Northern Soul you might want to investigate Honey Cone. They have "the sound" and are fresh.

Edna Wright, Shellie Clark, and Carolyn Willis speak to me even though I'm a man. Holland-Dozier-Holland wrapped these ladies in top notch melodies designed to iron-clad ensure success. On this record you can hear the two tracks that found the airwaves and caressed them, and a dozen other cuts you have never heard which you may grow to love.