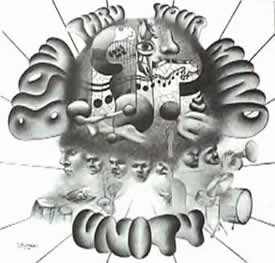 I know that one of the prime directives of the gullbuy is to bring new forms of music to the spotlight - to provide a means for true music fans to experiment with new sounds and genres instead of just finding out what the new record or reissue by the band they love sounds like, but I never thought I would review a band like Unity.

Unity are a free-jazz band from New York who recorded 'Blow Thru Your Mind' in White Plains in 1974. The reason I bought it is because Universal Sound is a division of Soul Jazz, and Soul Jazz is a label that has taught me many lessons.

Plus the sleeve looked cool, especially the vocalist Jay Clayton. Though her voice is only a small part of the brew, the four long tracks on this CD sound quite fine and belong in the open world of modern music, not just on the shelves of jazz fans who didn't need to be led to this record by the hipness of the label that reissued it.

There is upright bass (complete with solos!), sax, keys, drums,horn, and percussion. The music breathes - it is not based in a rhythm which carries it - it ebbs and flows. My favorite track is 'Reunion' though I like all the cuts. I hope that some of you check out this CD too.