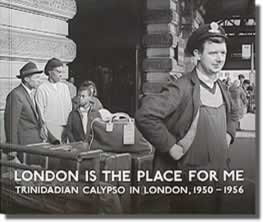 I have been a fan of calypso music ever since hearing the Mighty Sparrow when I was in college and when I get the chance I have collected the music.

Before ska, rock steady or reggae there was calypso - therefore it's only fitting once you've been into ska and reggae to dig back even further to calypso.

What fascinated me about the music is it's freewheeling sound coupled with its social commentary, an almost day by day report which is often like a photograph of a time and place put through the words of the singer. Because of this fact, the singer is very important to the calypso, their personality will shine through the song with their lyrical wit and imaginative description. I was unaware, however, of the huge influence Britain had on calypso and the fact that many calypso singers moved to England in the early 50s.

London is the Place for Me shines a spotlight on these calypso singers who moved to London and who would often sing about their experiences in this new culture. Artists included on this compilation include Lord Kitchener (nine songs in all), Lord Beginner (5 songs in all), Young Tiger, Lord Invader, The Mighty Terror, The Lion and Timothy.

Topics vary from song to song - there are songs about the landlady, a hurricane in Jamaica, cricket, taking the underground train, racially mixed marriages, and bulldogs to name a few topics - they certainly don't write songs like these anymore. There is a naive excitement to this music, and the music is forever bubbling in rhythms making it hard not to move while you listen. Incredible jazz musicians play behind the harmonious vocals often with intoxicating group choruses.

London Is the Place for Me (track 1) by Lord Kitchener is an exuberant proclamation of coming to the wonders of London, that first time visiting the city and is a great start to the disc.

I Was There (At the Coronation) (track 2) by Young Tiger is a fascinating wide-eyed look through the Young Tiger's eyes of a coronation in London near Marble Arch.

Lord Beginner's Mix Up Matrimony (track 3) is a hopeful look at mixed marriages with the idea that maybe segregation could end with so many occurring and is one of my favorites on the compilation.

My Landlady by Lord Kitchener (track 4) is a fun light-hearted song about a nagging and inefficient landlady.

Kitch's Be Bop Calypso by Lord Kitchener (track 5) is a cool jazz number which name checks the likes of Charlie Parker.

Victory Test March (track 6) by Lord Beginner is a sweet number about the game of cricket and another favorite of mine.

Birth of Ghana by Lord Kitchener (track 7) is a look at a revolutionary day in Ghana.

Aguiti by Lord Invader (track 8) is a hyped up number with a lot of call and response.

Jamaica Hurricane (track 9) by Lord Beginner is a more subdued number about a horrible hurricane which hit Jamaica with fine detail and emotion.

No Carnival in Britain by Mighty Terror laments things that are lacking in the UK (good rum, carnival etc).

The Underground Train by Lord Kitchener (track 12) is a light swinging jazzy number about the travails of traveling on the London underground.

Housewives by Lord Beginner (track 13) is a sweet little song about all that housewives do for their families.

Some Girl Something by the Lion (track 14) is a playful number with a hopping beat and the added change of a violin accompanying the slapping rhythm.

Saxophone No. 2 by Lord Kitchener is a hoot of tune about how his wife likes to play a saxophone at all hours of the night and is another favorite.

Fed-A-Ray by Lord Beginner (track 16) has a call and response vocal and is given an odd feel thanks to it's creepy rhythm and the fact it is sung in some language I can't recognize.

Bulldog Don't Bite Me by Timothy is another call and response song about a biting bulldog and has an accompaniment of acoustic guitar and a harmonica.

Spanish Calypso by The Lion is a hyper multi-lingual number which would surely get everyone on the dancefloor.

If You're Not White You're Black by Lord Kitchener is a thoughtful look at the differences between blacks and whites, and how even if a black person tries to meld into European culture, no matter what they try to do they are still considered black.

Track 20 - Sweet Jamaica by Lord Kitchener rounds out this tremendous and historical compilation with a reverse position from the first track in which he longs for home and no longer enjoys the new London culture he has come into.

All in all a delightful compilation well compiled and very interesting - even for those of us on the US shores.