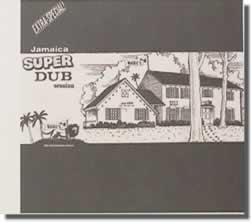 Bullwackies was a NY label based at 4731 White Plains Rd. in the Fort Apache section of The Bronx. Those ravaged streets were home to Lloyd Barnes, who left Jamaica in 1977. Lloyd had been a singer with Prince Buster back on the island.

In The Bronx he established a studio which recorded many reggae legends. His dubs were sparse, his budget tiny, and his records always sold out before everyone had a copy. But is was enough to get him a reputation that brought some of the finest talents to his studio.

He worshipped the rhythm. It is the rhythm that is the center of all things dub. Bullwackie's skill was in breaking down the sessions he recorded and building them up again as classic dubs.

Jamaica Super DuB Session is a ten song CD which originally came out in 1983. The disc starts off with Sibles in Dub, which centers upon Leroy Sibles solid bass part. Leroy Sibles was an original member of The Heptones who recorded on many of Bullwackie's records.

The next two dubs are my favorites. Promotion in Rock has a slow beat which nicely counterpoints the use of echo. Jamaica Dub is very upbeat, and has a tiny snippet of vocal at the start. Jamaica Dub has many sounds thrown in, including a lot of what sounds like a singing saw (like bluegrass people use).

My other favorite track is the last one, Dub Star. It is based on a vocal lounge standard I can't quite recall. What I can tell you is that this label could be a home base for people who enjoy dub. If you have enjoyed the dubs released by Jamaica Recordings (a current label that has been putting out unreleased dubs by many 70s Jamaican artists) you will be able to put your head around these tracks and move to the high power of rhythm.