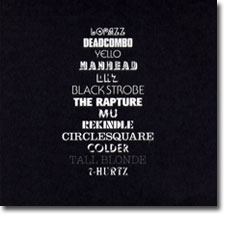 In 2002 Trevor Jackson had two hot properties under his belt: his band Playgroup and his label Output Recordings.

Output has released lots of great records. The label was considered to be at the forefront of the punk/funk or disco/punk movement that had previously been focused upon the DFA label in Brooklyn.

Output started out as a post-punk label, releasing records by Fridge. In 2001 they released a full length by Sonovac that predated the Electroclash scene by several months.

Now in 2004, Output's biggest name is Colder, with Black Strobe showing potential to unseat Colder if they release a full length record as good as many people hope for.

Channel 3 is Output Recording's third compilation. Despite having 3 unreleased tracks (by MU, Rekindle, and Circlesquare) plus tracks from several upcoming Output releases, I only found three tracks that really wowed me.

The compilation has 9 bands that were also on last year's Channel 2 comp. Bands on this comp that were not on last year;s comp are Lopazz, Dead Combo, Yello and MU.

The only track by one of these bands I really love is Base For Alec by Yello. Base For Alec was originally released as a B-side on a 12inch released in Germany in 1984.

Manhead's version of The Godfather's 80s hit Birth School Work Death does not have the life that the original had. I think that anyone who never heard The Godfather's version won't think twice about this track, and those who have loved the original will not get behind this remake as an inspired new take on a classic track.

The Playgroup dub of The Rapture's I Need Your Love was originally released on the remix 12inch of I Need Your Love. The version. It is not exclusive, and doesn't convince me to like The Rapture, whose Robert Smith styled vocals have always grated.

The Black Strobe track is an instrumental that will disappoint anyone looking for another Me and Madonna or Innerstrings. I sure hope the Black Strobe full length (will there ever be one?) has catchy vocal tracks with the strength of their early singles, as opposed to dark Coldwave dance tracks.

A track I love is Rekindle's Ice Skating Girl. The song borrows heavily from the New Order and Erasure songbooks, but adds its own touches, like a female backup vocal and a not very annoying rap part in the middle. Ice Skating Girl was the big surprise hit for me on this comp.

Another surprise was the Colder track. I have never been a Colder fan, but quite like The Slow Descent on this comp. The Slow Descent was originally on the Shiny Star 7inch from April 2003.

3 songs out of 13 is not too good of an average for a compilation. I wouldn't recommend that you go out and buy this record, except that the Yello song is very good, and it will cost you almost as much as this CD if you buy the limited 12inch one-sided single Output released of it, so maybe picking up this disc is not such a bad idea, as you may find yourself liking a different set of tracks than I did, or finding a new band you haven't heard that you want to hear more from.

Output Recordings in the gullbuy:

Channel 2 - A compilation of Output Recordings