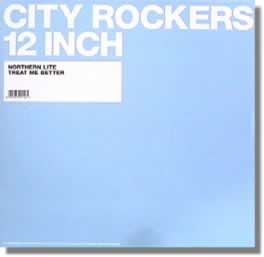 The timing of this record couldn't have been more appropriate. Northern Lite (Andreas Kubat and Sebastian 'Boon' Bohn) create music that fits perfectly into the synthcore/electro music scene that's currently so huge in Berlin and Detroit. Call it trendy. Call it retro. But, seriously, this single doesn't sound like it was made twenty years ago.

Kubat and Boon met in 1997, coming from different musical backgrounds; Kubat was a hip-hop producer and Boon was a techno DJ. Northern Lite's first album, 'Small Chamber Works,' was self-released in 2000, followed by four 12inchs on 1st Decade Records. This past month, 1st Decade released a Northern Lite remix of Sigue Sigue Sputnik's 'Everybody Loves U, ' which also featured a remix by Berlin's Tok Tok vs. Soffy O.

'Treat Me Better' (NL's first single on City Rockers-the same U.K. label that put out Felix Da Housecat and Drug Punks) is a bass-heavy dance number with deep, lethargic male vocals repeating two lines: 'Treat me better' and 'Someone for you.' The lyrics aren't as sexy and fun as a Miss Kittin song, but the music itself could easily fill any dance floor. The one thing I don't like about this single is that it ends abruptly. Nevertheless, let the spontaneous dance party begin!