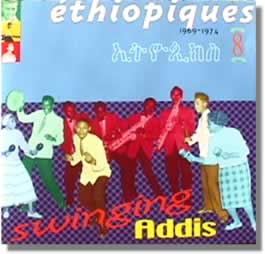 Every once in awhile, here at the Gullbuy we get a wakeup call to just how lucky we are to live in a culture of relative freedom, and I think listening to Volume 8 of Ethiopiques: Swinging Addis is one of those moments.

Stemming from a tape underground music scene in the 60s coming out of Ethiopia was a record label called Amha Records which not only defied the government controlled recording industry, but could've caused any number of performers and producers to be jailed simply for making their own kind of music. Incredible! Blessed by reigning Emperor Haile Sellassie, what followed can only be called a music explosion of incredible proportions.

These people knew they had only a short time in which to be heard before it all caved in again. This desperation can be heard in the intensity of every track on this incredibly soulful and funky collection, and while we may not understand the words, there's no denying the feeling of pounding funk and screeching soulful vocals.

Typically, a military coup brought an end to the Ethiopians funk scene around 1974, and by 1978 the music had become nothing more than a trickle. Listening to this collection, is like hearing a bunch of lost soul and funk 45s. The bass playing is tight beat-driven, the guitar work is funky, the arrangements are startling original, and the vocals and melody are varied and memorable.

One thing I found interesting to consider: while here in America, funk and soul music can and is enjoyed by everyone from the average working Joe to the richest guy, the Swinging Addis music of Ethiopia was enjoyed by an elite few who ventured into the city clubs, because most Ethiopians are farmers. So while we hear the soul of an everyman in these funky songs, these contain elements of a mimickry of one culture into another. This aspect only adds that much of a curiosity to this collection at the combination of American soul and Ethiopians tradition, because it's a hybrid which goes beyond each culture creating something innovative, new and exciting, finding its way to our shores some 30 years later.