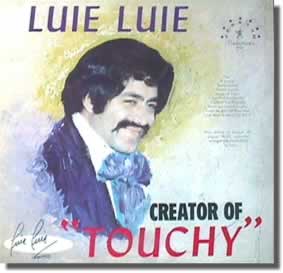 Luie Luie is a Mexican one man band that is half Cheech and Chong, and half bargain bin Esquivel. While Esquivel threw in everything but the kitchen sink and made it work with his unique genius, Luie Luie has a dozed or so gadgets and aspirations beyond his techniques.

He is one of the hundred or so folk that introduce themselves on the last track of The Bran Flakes second LP 'Bounce.'

Limited to 800 numbered copies, this LP is an exact reissue of an obscure privately released 1974 Mexican record. Almost every song on Touchy concerns a special dance he hoped to popularize, called The Touchy. Most songs start off with dialog from Luie Luie. If I wanted to amaze people while DJing I would play almost any of the tracks, but start them after the monologues.

The disc opens with El Touchy. It is Tijuana ska that would move people on a dancefloor if you edited out the intro. The song features a lot of trumpet.

Tastee Touchy has music that reminds me of the theme from the 60s TV show Green Acres.

Touch Me With All Your Heart has a particularly long monologue in which he describes a 'touchy button' that dance partners could put on themselves where they want their partners to touch them. That way The Touchy could be an improvised dance, but each person could control whether their hip, elbow, or anywhere else was touched.

Tortilla Touchy attempts to evoke the feel of a tortilla factory (as Luie Luie kindly informs us). It is a crazy song that is one of my faves on the LP.

Side 1 closes out with Sweet and Tender Touchy, a ska styled song that would win with the scooter set.

Touch of San Antoine has a heavy bass drum beat that starts it off feeling more like a Las Vegas grind than a touch of San Antoine. However, the song goes through lots of changes, including a familiar melody I only know as a 70s Fritos jingle (Aye aye aye aye, I am the Frito bandito).

Lost starts out like a lost track by Herb Alpert and the Tijuana Brass or The Baja Marimba Band. The the guitar comes in, and the odd feel this record resides in is restored.

Touch Of Light is composed completely of overdubbed trumpet parts. It gets very busy in parts! On it I hear part of the melody of 'White Christmas' (the part 'sleigh bells in the night'). Touch Of Light can also be heard on the just released compilation Songs in the Key of Z: Volume 2. On this LP Touch of Light is the second to last song on side 2.

The last song is one of my favorites on the record (after the monologue is over). Lord What A Wonderful World is a bit crazy, has strange guitars, and is a great close to an interesting record.