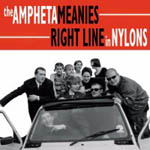 The Amphetameanies have a great website, but you won't find any info on it about who they really are (though you will be able to hear many of their songs on the site). I can say for sure that The Amphetameanies are a Glasgow ska band that Belle & Sebastian trumpeter Mick Cooke plays in, but I also know that there are members of The Yummy Fur and Pink Kross in there too. Even if you regularly don't listen to ska you just may find yourself liking this record. If you already like ska you are all set with this disc. At WZBC we already the "Last Night" 7" and the song "Whisky" on a split 7" with The Newtown Grunts. I like The Amphetameanies because they have good songs that have the traditional ska sound but are not cliche ridden or hopelessly derivative of the Two Tone forefathers. The songs have identity of their own, are fun to listen to, and make you want to dance like Ursula 1000 at the bottom of this page does. 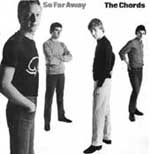 The Captain Oi site says "First time on CD for this legendary Mod album that reached No.30 in the UK charts in 1980. Includes all five of the bands hit singles - "Now It`s Gone", "Maybe Tomorrow", "Something`s Missing", "The British Way Of Life" and "In My Street". The 11 bonus tracks include many non LP B sides, all now expensive collectors items. Great booklet". What I can say is that this LP was one of the most important records in my life at the time that The Jam ruled the world, the Quadrophenia film had just come out, and bands like Squire, Purple Hearts, and Secret Affair ruled my heart. With the path of time I lost my copy. I found one at Second Coming Records in Harvard Square for $6.99 a few years ago and was pleased to hear that time had not lessened the effect of these songs on me. This CD has the full record plus all the A's and B's of the singles, making it pretty indispensable if you are a fan of Mod Revival bands of London in 1980. The website I linked to The Chords name above has 5 of their songs on it that you can download.

Global Village Idiot writes "Fabulous collection of Bollywood film music, that madcap genre of Indian music that falls somewhere between the popular and the bizarre. Bits of Western pop are cuisinarted together in a manner that's wilder than your last acid flashback, and wierd and wonderful seems completely normal. It's Western life refracted through a cracked Indian lens, utterly charming and kitschy. to be fair, it sounds more like it was recorded through two tin cans and a piece of string than in any state of the art studio, but that's by the bye. Anyone with a seriously warped mind needs this in their collection, a record where spy music can morph into jump blues, or a music box motif can fall into aural hallucination. Superb". Indian film music has done very well in the reissue game with the 2 volumes of this series and the even more recently released 'Bollywood Funk' compilation on Outcaste Records. 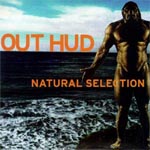 Midheaven mailorder describes them as "A blend of late '70s and early '80s post-punk, dub, dance and hip hop shift from these Sacramento-based sound travellers. Features former members of RAOOUL, TOURETTES, and the YAHMOS. Upcoming releases on Kranky". Out Hud have been tearing up the WZBC charts with their "Elephant Stomp" 7". The single being added today came out just before the one in the charts right now. Out Hud have a really cool sound and are a big hope for me as they don't even have out an LP yet but already have myself and many other ZBCers in their pocket. I really hope Kranky does not smooth out the rough edges that make them so incredibly appealing right now. Instrumental non-techno music from the US does not sound as good from anyone else as it does from Out Hud.

Sonovac are the London-based brother and sister duo Mike and Suzy Silver. Sounds like The White Stripes? Sonovac's music will end that comparison. Sonovac are completely electronic (with vocals), as opposed to White Stripes stripped down roots sound. Sonovac released a worthy cover of The Cramps "Human Fly" on Output last year, with female vocals and over the top electro sounds. Human Fly is a song I never thought anyone should touch, but Sonovac manage to re-interpret it and capture the original feel both at once. I've heard they do a cover of Ramones "I Wanna Be Sedated" as well. This EP is the precursor to their 'Raw' record out any day now. It has 2 different versions of 2 songs. Their (really slick) website has the first version of both songs and 2 more songs as well for you to download and listen to. Sonovac sound a bit like Chicks On Speed with only one female vocalist, but a male vocalist as well. I like what I've heard from them so far. Their record could be really great! 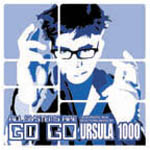 Ursula 1000 is a DJ from NYC with 2 records on the label run by Thievery Corporation, Eighteenth Street Lounge Records. This record is kind of like a compilation; he mixes 18 songs like he would in his live sets (in fact this disc is from a live mix he did in NYC). The artists include faves of mine like Mo' Horizons, Montparnasse, Los Chicarrons, Le Hammond Inferno, Resident Filters, and Nicola Conte. I like the way he mixes things together. One song "She Is a Pretty Girl" has a recognizable section of a song from Grease in it's backbone. He closes out the disc with the a-0side of his single for rough Trade's label 'For Us Records', the song "Polyblend". That song was a kick itself with it's speeded up vocal line that sounds grammatically correct at 33 RPM but musically correct (in the context it is presented) at 45 RPM. Ursula 1000 put on a DJ set at Lilli's (the new Somerville MA club which Brother Cleve is part owner of) last month. I was not in town to see that show, but figure that if this CD is any indication I missed a great set. Go Go breakbeat is what you'll find here, and if you like that this disc has life and spice. If you liked the Blow Up a Go Go compilation a few months ago you are just daring enough in your play tastes to find plenty to enjoy here.