First 7inch since the "Internal Wrangler" LP came out. The 2 songs on the B-side are new. Both are vocal songs with the same kind of lo-fi production values and sound as their LP. The first of the new songs uses reverb on vocals and guitar, Velvet Underground sensibilities, and several appearances of a New York Dolls styled background vocal, along with a "Crimson and Clover" vocal tremolo ending. The second of the new songs is much more upbeat, like Add N to X with the organ way out front in it. Clinic and Maher Shalal Hash Baz are two of the few bands I know of (in current times) that can actually make use out of a murky production, turning recording deficiencies into an assett.

This is the follow up to the "Muzico Discordia" CDR that the keyboard player of the band John Sims put out 2 years ago from his home studio in Leicester in the UK, in a numbered edition of 100. It also follows two 7"s. The leap forward is really astounding though. I liked John Sims alot. They had a female vocalist whose voice reminded me of Leah from Betwixt/Turkish Delight. They were friends of Prolapse and for awhile seemed to be on the verge of success, even having their LP licensed by Bedazzled for US release, with their record already out in the UK on 2 strong labels (the vinyl version was on Fortuna Pop!, the CD was on Sorted). When the first Discordia disc came out it sounded like a side project, though no new John Sims material came out afterwards. Now this disc, and John Sims are not even missed, such is the power of the stuff on this CD. His sound reminds me a bit on a less polished Grand Central record (the Manchester label that Only Child and Andy Votel record for, which put out the 'Central Heating 2' compilation we have on playlist at WZBC). He does the same thing as Solex in naming all his songs some variation of Discordia, but that bothersome trait aside I love "Even Discordians Get The Blues" and "Winter Grips Discordia", which makes heavy use of a great Joy Division sample.

Pretty cool disc indeed. The Gizmos sounded like The Modern Lovers or The Monks (with their acoustic guitar in a wildly rocking rhythm section), The Stooges or MC5 (in the wildness and riffs), and Lou Reed, Willy Alexander, or Wayne County (in the vocals). In 1976 calling someone a "punk" did not even have any meaning yet except in the traditional sense. It was still early enough that they all had long hair. The Gizmos played the kind of rock that Lester Bangs was writing about in Creem. In Bloomington Indiana The Gizmos had a parallel evolution with bands like The Dictators, who were combing the Bronx building a following as The Gizmos were putting out self released EP's, or The Twinkeyz in San Francisco. One song ("Kiss Of the Rat") could be a Richie Parson's Unnatural Axe song, with a vocal style right out of the Parson's songbook. "Cave Woman" has the style of fast strummed guitar and tom tom snareless drum that The Feelies presented a few years later in their native New Jersey. The Gizmos have a connection to Boston Rock in more than their sound though: they have Kenny Highland playing guitar! To make it all ever more astounding and stellar you will hear "Boring, Part 1", written by Johnny Cougar who played guitar and backing vocal on the song he wrote, years before he pumped out the crap with his "Mellancamp" handle. His song does not even rank in my faves on this disc, but if it serves to make a few more people check out The Gizmos I'm glad it was included as an 1977 outtake.

No about faces here, no matured sound or new muses: Helen Love give you three songs that sound just like Helen Love. Is that a good thing? You bet. While it's easy to say they aren't doing anything new, they ARE emulating their idols (The Ramones) by putting out great songs over and over again with the same Ramone inspired Helen Love formula (much more updated version of classic "Hey Ho" sound with female vocals, pop culture subjects, and casiopop leanings neath the buzz guitars). Their lyrics are always fun to listen to, their tunes always make you feel good, and their sleeves are a familiar as favorite sheets. Unlike any other band from Wales except Teen Anthems (who are also known as Supercute). Helen Love may be derivative but they already have imitators: just listen to Anorak Girl or Nazis From Mars. Helen Love have 2 LP's which compile their oodles of 7"s, and are due for their first real LP this September. Can't wait! 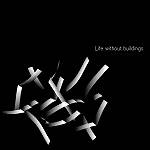 Fron the Domino webite: "Life Without Buildings, their name taken from a Japan b-side, are Sue Tompkins (voice), Robert Johnston (guitar), Will Bradley (drums) and Chris Evans (bass). They all met at the Glasgow School Of Art and formed the band last Summer through a mutual love of PiL, ESG and Television. Though based in Glasgow, only Robert is Scottish (the rest are English). At only their first concert, in June last year at Londons Po Na Nas club, they were spotted by Tugboat Records who asked them to record a single. The result, "The Leanover" b/w "New Town" was recorded at Chemikal Underground Studios and was released in March of this year." This is their second single; the single I discovered them with through the raves Rough Trade gave it in their new release update when it came out 2 months ago. Ivanna Burgess (WZBC Tuesdays 12- 3 PM) said it sounded like a female fronted band from Argentina she had bought a CD from. Sue Thompkins vocals have a bit of the chirpy sound Altered Images had in the early 80's in Scotland. The music is spunky and energetic, and the whole thing works just right together. I'd love to find the first single, and I will definetely pick up forthcoming releases from them as well. I seem to remember writing something similiar about MoHoBishOPi back when I first bought a single of theirs for WZBC and look where they are now. Life Without Buildings have such potential, and could even play on a bill with MoHoBishOPi as a fine fit.

The A-side is almost a dead ringer for Sonic Youth's "Teenage Riot". But instead of just being a ripoff MoHoBishOPi make a super song with male/female trade off vocals (Rachel Tomsk guest vocals), a false stop, killer Don Flemming production, and attitude & style to spare. On the first song on the B-side MoHoBishOPi remind me of Union Kid, who we have a single from at the station. The song is fast, with plenty of sharp turns and staccato vocals. The second song is nothing much to me, more of an undeveloped afterthought than a companion to the other two great songs.

The art of cool can be played several ways: you can have your tongue firmly in cheek like Black Box Recorder, you can be suave like Katerine, or you can blow a kiss to it all like Pram. Pram are the less well known spiritual cousins to Broadcast (who are from Birmingham like Pram) and Laika. Pram have out way more records than either of those bands yet remain in their shadows. They have 2 easy to spot trademarks: the distinctive slightly wavering vocals of Rosie and the muted trumpet which weaves through their sound. The 2 songs on this single take the sound quite a bit further, though toward accessible, not into the deep. In fact, the B-side ("The Mermaid's Hotel") is my favorite Pram song ever. It doesn't have any of the trumpet which (to me at least) became a bit overplayed in their sound. In it's place is Hawaiian guitar, cello, violin, viola, and recorder; each used to stunning understated effect.

Re-release of a 1979 legendary cassette-only release by this Welsh band from Cardiff. Stuart (guitar/organ) & Phil (bass) Moxham and Alison Statton (vocals) were Young Marble Giants. This session was recorded before their first legitimate release. In their whole existence all they put out was an LP and two 7"s. Despite this, they have become incredibly relevant as forebearers of indy electronica and female vocaled electronic pop. Home recorded on their reel to reel, this predated by 2 decades the 'bedroom electronica' scene which blossomed a few years ago and led to the acceptance of techno oriented acts today by rock and pop fans that never had considered electronic and dance musics as a part of their world.