The first Badly Drawn Boy single since he became a star after the 'Once Around The Block' single. Three new songs, the first of which also appears on the full length.

Did WZBC really need both these CD singles from Badly Drawn Boy? I'd say yes. Besides the song 'Another Pearl', which is on the new LP "The Hour Of The Bewilderbeast" there is a Broadcast remix and a Fridge remix . Both versions are pretty darn good. They keep the song basically intact, but add aspects and accents that tweak the song into the realm of what each band is most comfortable working in as a palette. For the Broadcast mix that involves dropping out Damon's guitar, adding a submarine 'ping' sound with the beat, a touch of harpsichord, a bit of reverb and a fuzz guitar in the midst of a few other tricks. Fridge's mix accents the beat, drops out the guitar (as Broadcast did) and adds a percolating synth below a Numan/Ladytron melody synth. Fridge's version does more surgery on the song than Broadcast's. I'd have to say that as much as I like Damon Gough's Badly Drawn Boy, I like these 2 remixes better than the original version, definetely.

Cousteau are a young London band which have been getting attention due to their singer's voice, which sounds like Stuart Staples of The Tindersticks or Scott Walker. I can see both those comparisons on the A-side of this single, though it's the B-side which is my fave of the two here. It sounds a lot like The Associates used to on their record 'The Affectionate Punch'.

Ian Catt (Saint Etienne, Trembling Blue Stars, Shampoo) produced this big sounding 3 song EP. Fosca is Dickon Angel (a North Londoner) plus 3 others. Like Linoleum Fosca have 2 guys and 2 gals. Dickon also performs live with Spearmint as a supplemental guitarist, which is a pretty strong testament to his skills. On the second song ("Confused And Proud") Fosca play electronic pop similiar to labelmates Trembling Blue Stars if Cinerama's David Gedge (ex-The Wedding Present) were singing. The third song ("Weightless") has acoustic guitar and a great vocal melody (with female backups) that reminds me of another song I can't quite place. It's my second fave on this EP. My favorite song is the first, the title song of this EP. It has the most bounce, the most guitars in it, and is really catchy as well. 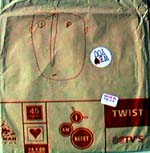 The second single by this Manchester band which has just been signed by the label Wall Of Sound. I Am Kloot have a "Badly Drawn Boy" sound meaning that they bring their new confident slant to classical rock sound in a modern frame of reference. The UglyMan website says of this trio "Formed in March 1999 I am Kloot hail from Manchester and play dark spiritual atmospheric guitar pop music. Their debut double A sided single entitled Titanic/To You was released on 15 November 1999. With their recent signing to the prestigous Wall Of sound label and their appearance on that label's "We Love You...So Love Us" compilation they seem to be in the right place at the right time. I really like the B-side of this single. It has caught my ears much more than the A-side has so far.

Linoleum's first single in 2 years. At that time they were a Sonic Youth inspired (in the guitar side) band with a sexy female vocalist who had too long false eyelashes and a sneer to match. The tide has changed and that sound has fallen out of favor a bit. Linoleum's return to the arena is a well chosen cover version. They chose to cover the 1981 single by The Passions "I'm In Love With A German Film Star", which they do remarkably well. The B-side is decent, but doesn't pack the punch the cover does, to my ears at least. The single came with a strip of Super 8 film which I've permanently attached to the sleeve. Someone bring a magnifying glass and tell what's on it?

Gotta love Newbury Comics used CD stacks. If you've got patience you can come across underpriced gems like this CD quite frequently, as the turnover in the used section is frightening. Me, I don't have the patience, but I do have Peter Lebedur looking out from me. He put this disc in my hands with a post-it declaring that I absolutely HAD to buy it for WZBC, that it had provided Magnus, a local DJ that is both legendary and humble (he currently does the Dub-Hop show on WZBC as well as air elsewhere) with many crucial breaks. This record was recorded in 1959 and has 24 songs/spoken pieces, with his amazing 'Beat Generation' among them. This is the song that Richard Hell took the piss on with his anthem 'Blank Generation' back in 1977.

Twisted Nerve is the label run from Manchester by Andy Votel and Damon Gough. The singles on the label fly off the shelves of the few stores that carry them and never return. This is Mum & Dad's second single. I have never heard or seen the first, but I managed to find 2 copies of this one (if I had only found one you would have had to visit me to hear this!). I truly love this single, and it is my pick of the week (without any hesitation). Mum & Dad have a sound I really enjoy. They spin in the same spheres as Ladytron, Noonday Underground, Lolita Storm, or Chicks On Speed, though each of these bands are quite unique and separate from the others. Listen to both sides, and play often!

Stewart of Boyracer has been very busy putting out great releases as Steward since Boyracer broke up. He is enough of an icon that already I've read reviews (it was actually a review of a Gulliver 7" on Pickled Egg in Satellite #2) that used Steward as the pinnacle which the artist they reviewed had approached on his single. Steward has a sly craft and mastery of spontaneous ideas captured in well developed form. I know that is a contradiction, but somehow he does it. There are 5 songs on this EP. Some have vocals and some are instrumentals, but all are crammed with ideas and dimestore electronics, served up with in your face abrasive style. There are 2 instrumentals, 2 songs with vocals, and one 'goodbye' piece which uses an old fashioned song that even sounded square when your parents were young.

The first release on Billy Childish's new label was also to be the swansong for Thee Headcoats. The A-side is his version of the song he wrote for Thee Headcoatees, which Kyra sang. The B-side is my fave though, a Childish penned Rn'B stomper. Both songs are hot studio recordings which really sound great. This was not a lame way to end at all, and we already know (from last weeks gullbuy) that the next chapter in this prolific mans band life will be pretty damn cool as well.

4 song EP of quality tracks that swoon like an electronic version of PreFab Sprout. As you already know, Trembling Blue Stars is the band that Bobby of The Field Mice and Northern Picture Library writes, sings, and plays in. The neat thing about this band to me is that the songs are so great. Almost every single band dissapates over time till the point that they kill their own career by releasing such pale imitiations of their earlier stuff that even their fans abandon them. Trembling Blue Stars is the exception. Their sound is not a retread of earlier associated bands, though the signature vocal sound is completely there. Bobby and his band Trembling Blue Stars receive the kind of love from their fans that only bands like The Go-Betweens enjoy, and every bit of it is fully deserved.