My second favorite record in the gullbuy this week. This is the second single of Airport Girl. They are a band from Leicester in England who also have a single on Fortuna Pop! (the extremely 'The Only Ones'-ish "From Delta to Delaware") and a song (the song "Airport Girl") on a Fortuna Pop! 7" compilation with International Strike Force, Kooky Monster and Taking Pictures which was added to WZBC on Jan 26, 1999. This single has the sound I expected on the new Sportique 7" added last week, which did not have the usual Sportique sound (Buzzcock styled poppy punk). Airport Girl could really put out a great full length if this single is any indication. They are hungrier than Sportique and sound as fresh and fun as you could possibly want.

My favorite record of the gullbuy this week. This is the second release of this new label (the first is a Headcoats 7") and is the debut release of Billy Childish's new band. It is a great start to take: a well produced double A side of 2 Hendrix covers that just jump starts his new band and separates them from Thee Headcoats immediately. Both sides are great. This single is even better than I hoped, and I had HIGH expectations

1994 CD5 which was bought at Newbury Comics used bin from a batch of discs that WMBR DJ Marianna sold to lighten her load as she moved to London (congratulations Marianna). Citrus are a quirky Japanese band that are still putting out stuff (in fact a new Japanese release from Citrus JUST came in at Other Music last week). We have a CD5 from Citrus in our library from a few years ago. I remember really liking a couple of songs from that disc. This EP is a bit trickier than that one was. There are 10 songs on it, but only 4 of them are actual songs. The rest are just short snippets of conversation or such (maybe great for mixing into other things?). 3 of those 4 songs are just over a minute long. Only one song (the last one) is regular length at 4:03. I like the 3 short songs best. They alone make this a decent purchase for the station. For you reading this though, I would advise getting a more recent Citrus release for your collection.

The fanzine 'Stink Of Shoe Polish' did an article on them which is short and captures their essence. We have their debut single. They have just put out a new Don Flemming produced 7" which is supposedly great which I have not heard. When I saw this marked down at Newbury Comics from $9.99 to $6.99 there was really no question about buying it. On their debut single I thought they sounded a lot like Further (the CA band who are sadly no more, though The Summer Hits and Beachwood Sparks carry some members). Mo-Ho-Bish-O-Pi are from Wales, though they do have that American sound like Further had, or like Damaged Good's Honeyrider has still. There is also a hint of Dinosaur Jr, Sonic Youth, Snow Patrol (on "Take A Target"), and The Fall ("Gay Fad") in the sound as well. If we were counting, this would be my third favorite release this gullbuy. My favorite song of the 5 here is "Prosthetic Groove", which is energetic and short, like Kleenex Girl Wonder were when they first started out. Can't wait to hear the new single which supposedly has female backing or trade off vocals. They were just singed to V2 records, so this band could end up being well known shortly.

The follow up to the "Care In The Community" CD which came out on Bristol's Cup Of Tea Records in 1996. Monk & Canatella's sound has changed a lot in the 4 years. They have a much harder sound almost like the Primal Scream 'Exterminator' record on some of the songs. The current single 'Slagger' (here in 2 versions) could almost be read as a cross between current Primal Scream and Red Hot Chili Peppers. In fact, a few of the songs have a Pepper-ish touch. My 3 faves from this disc are those least like this new sound. I like the opening song "Enter The Monk" which sounds like Fuzz Townshend or Psychedelia Smith, the second song "Monday" which has beats, samples, and a lot of the old sound that made Monk & Canatella's last album so popular with many. I remember Rani and Brian (WZBC's award winning 'School Beats' show, Mondays 6-7 PM) telling me how much they loved the "Care In The Community" CD when it came out. My third fave is "Research". It is the song I least mind of the new sound, with the male vocals right up front in the mix. This record has great production and appears to be carefully constructed, it just is basically not my sound I guess.

I like Depth charge a lot, and Octagon Man is just Saul Kane, who IS Depth Charge. I really like both the recent Depth charge discs, "Lust" and "Lust2", which came out as simultaneous full lengths, something no one has done to my knowledge since Guns & Roses released their 2 "Use Your Illusion" CDs. Octagon Man is less party time beats and sample oriented and is more NCP-ish to my ears. Maybe more serious would be the right term? There are no pop culture references here. The music is somewhat stark, definetely modern, and completely electronic. 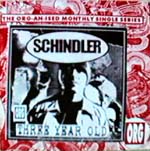 The last Org release that we got was the Mogul / Beatmoll split which had "a slew" of other songs on it besides the feature songs of the split single. That release caused a bit of mixed opinions at WZBC, with one of my favorite songs being tagged by another DJ as sounding like Veruca Salt's 'Seether' (Ouch!). This disc only has 3 songs, and I've got to say that the sound of this band is not for me. I'm not commenting on the quality of the songs, because I have no right to: this is not my sound, though it might be yours. Schindler play a 4/4 punky sound like mid period Husker Du or Replacements, though without the special magic of either (to my ears).