After one EP called "77 Sunset Strip" Alpinestars have this full length. They have a sound that blends together a lot of different things. The synth they use sounds a whole lot like Gary Numan at times (particularly on #'s 1 & 7). The vocals have a California melodic sound like some of the Shinkansen bands try for. As with Bent, you could track part of their sound back to Air's Moon Safari record as well. They do pull things out of the hat though, like the song "You Rescue" which sounds like Vashti Bunyan http://www.anotherday.co.uk/ the 1970 English folk artist whose "Just Another Diamond Day" record was just rereleased on Spinney Records (the new label started by the folks in Quickspace). The song "Cresta La Wave" has female vocals and a really upbeat sound with more of that Numan-esque synth. "Size 9" has an early New Order-ish sound (particularly the vocals, which sound like "Ceremony"). Alpinestars have a pretty good record- It's my fave of this weeks adds. The single "77 Sunset Strip" is a really great song. It's sound reminds me a bit of the band Bridge & Tunnel , whose "Borough Of Kings" EP was added in the May 9 2000 gullbuy. The label this is on also put out the great LP "On The Ropes" by Mint Royale. 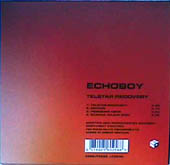 Four song EP with one song from his second LP for Mute and 3 songs which will remain exclusive to this EP. Mute has really become a strong label. It has both stateside and UK offices and a roster that is right on today's pulse. The Goldfrapp record is doing very well for them if writeups are any indication, and the new Add N To X full length should sell like oodles when it comes out this month. The main song of this EP "Telstar Recovery" sounds a lot like Clinic to me, particularly in the vocal department. It is a pretty great song. I'll bet it does great on WZBC. It is very immediate and focused. "Moving" is a slower instrumental with a neat Faust-like clanging sound in it. "Pressure Drop" is a vocal song with a Giorgio Moroder-styled synth pulse and lots of thrown in effects. "Scaras Major 3000" uses a sampled voice loop and is the most experiemntal of the 4 tracks here. My faves are the 2 vocal tracks. "Telstar Recovery" is definetely the best song out of the 4. I don't really like Echoboy yet was grabbed by the track nonetheless. 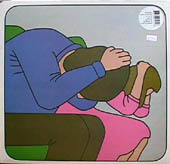 Ensemble is an electronic altered-pop duo with female vocals. They sound kind of like a mix between Seattle's Slabco acts Draco and Volume All*Star, Birmingham's Pram , Japan's Pop-Off Tuesday , & Isan. Their website informs us "Olivier (24) was born in Toulouse and is currently in London studying a degree in "Sonic Arts". Chanelle (21) was born in London but is half-Parisian. They are a couple who discovered 5 years ago that both loved the boiler / pipes / static / electricity sort of sounds and the same type of harmonies". This is their first release. Their songs have not title's, just 'proposal' numbers. Some songs are instrumentals. There are 12 propoasls on this LP. I like 4 of the songs a lot (#'s A1, A3, B4, & B5) and one instrumental (A5) which sounds very quiet, distant, and intriguing. 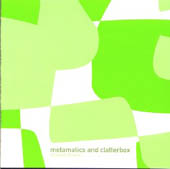 Collaborative project between David Kempston (Clatterbox) and Lee Norris (Metamatics). Clatterbox had a CD on Clear Records ('Eazy Does It') a few years ago. Metamatics have several records. The latest was only added to WZBC's playlist through the gullbuy 3 weeks ago. "Following the success of the first two Neo releases comes Project Unison, the first album release from Neo Ouija. This is a collaborative work by Metamatics and Clatterbox, both formerly Clear artists. The concept behind the project was to produce remixes of tracks that didn¹t really exist. Each artist found the sounds that the other created interesting, so exchanged DAT tapes of samples by post and then worked to produce 4 tracks each from the sounds that were received. The result is warm, melancholic electronica, often sad, always beautiful and full of neo ouija, the sound of new magic. Interestingly each artist¹s pieces of music resembles a part of the others soul even though there was a detached element in the creation." I really like the 4th song on the A-side ("Heddon Zara Spook"). It is very spritely. I also like the 2nd song on the A-side ("Allegro"). The first song on the B-side ("Jet Set") gets good after the beginning, which has a Rhodes sound that to me sounds a little dated, unless you love the sound of Clear Records CD's by As One, Doctor Rockit, and Metamatics. Their 1997 discs had a jazzy feel that defined the time for me. Point is, "Jet Set" starts with that sound, though the song moves beyond it into a good cut. The B-sides centerpiece is "Organic Healty Robot" which bubbles along for a fair length, going through changes along the way. 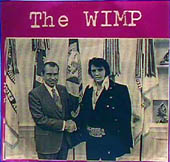 The Wimp is Pete Dale of Slampt Records / Red Monkey / Pussycat Trash / Avacado Baby / Milky Wimpshake. In fact both of these songs were originally released (in different versions) on the Milky Wimpshake cassette "Songs of Zoom and Buzz". This single is just him and an acoustic guitar playing the songs, though his style is hardly singer/songwriter. He carries all his songs really well no matter what band he is in with his unique personality and spirit. I'd say he was like a less political Patrick Fitzgerald (the writer of "Safety Pin Stuck in my Heart", the song popularized by The Bartlebees) or Billy Bragg, though I like his stuff better than either of them. Here's what thwe Troubleman site says about this single "Pete Dale is the singer of Red Monkey/Milky Wimpshake. He's a brilliant songwriter and a wonderful lyricist. The songs are catchy in a Billy Bragg/Billy Childish sort of way, and his playing is that of a well-trained folk singer. Its messy and heartfelt and catchy and witty and romantic and fearless. If you are familiar with Milky Wimpshake or Red Monkey you know what to expect. This single is limited to 500 hand numbered copies, so you know the drill".