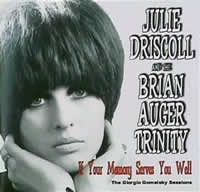 Brian Auger was a promising jazz pianist in the early 1960s

Unfortunately for the jazz world, he came under the spell of the Hammond organ and R&B music. He soon formed early versions of The Brian Auger Trinity (guitarist John McLaughlin was an original member).

The Trinity went onto the back burner, however, when he helped form the group Steampacket, along with Long John Baldry and up-and-coming vocalist Rod Stewart. Another vocalist in the group was one Julie Driscoll. [Somewhere in there he also found the time to play harpsichord on the Yardbirds For Your Love].

When Steampacket folded in '66 he took some of that band's members and formed a new version of The Brian Auger Trinity; Sometimes Driscoll sang, sometimes Auger.

This CD compiles tracks from these collaborations but also some that pre-date that period by a year or so. Unfortunately there are NO liner notes or even credits -- they even got one of the song titles wrong -- good one, Dressed to Kill!) But from what I've managed to scrounge up with a little lightweight research, these tracks pretty much all date from '65-'68, many (most?) of which were singles. The first six tracks on the CD are credited to Driscoll, the latter six to The Trinity.

But enough about all that, what does it sound like?! Well, the Julie Driscoll tracks are, for the most part and in a nutshell, second-string Dusty Springfield. (It's a shame that any Brit girl singer from the sixties with any soul at all should be held to such a high standard, but that's the way it goes.)

One exception is I Didn't Want to Have to Do It (1966) which sounds like Dusty Springfield singing Burt Bacharach. Actually, for all I know it *is* Bacharach, like I said: no writing credits! Really great. Two other stand-out tracks are I Don't Know Where You Are (196?) and Shadows of You (1967.)

I was able to ascertain that Shadows of You was actually The Trinity (a single b-side) and though I couldn't find out anything about the other track, judging by its sound, it too is The Trinity. Both are jazzy and a bit psychedelic, the combined male/female vocals bring to mind the Jefferson Airplane only far more jazzier.

Of the Brian Auger Trinity tracks, two are uptempo R&B numbers with male vocals, three are instrumentals (one jazz, two R&B - one of which is a complete rave-up) leaving the final track, Tiger. If every other track on the CD had been a flat-out dud (which is most certainly NOT the case) it would have still been a worthwhile purchase for this track alone. Growly organ, spoken/sung vocals; hot stuff and dead sexy!