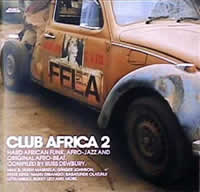 Last week 'Club Africa' was added in the gullbuy. This week I offer the second volume in the series, plus the news that Strut has released a retrospective by Oneness Of Juju, whose River Luv Rite song on 'Club Africa' was one of my faves.

Club Africa 2 carries all of the attractions that brought me to the afro-beat sound. Manu Dibango's New Bell (#2) has the killer hand struck drum sounds, funky beat, vocal embellishments, and fender bass that I love so much.

West African Cosmos Wuye Wuye (#6) has rhodes keys, a fuzz guitar, and a wild time signature on top of which the vocal skitters intricately.

Living Funk's Let Your Mind Take The Place Of Your Body is a song which gives lots of space to the brass instruments which are so much a part of the afro-beat sound. It is basically an instrumental but for one line spoken near it's end.

These tracks (and pretty much all on the CD) are joyful, but there is one track that just bombarded me with it's lyric and message. Roy Ayer's Black Family (#7) musically asks why so much trouble comes to the black man. For over 9 minutes the song completely caught me, especially as it gave us the answer: Ignorance.

My best advice is to not let yourself remain ignorant to the great music being re-released these days under the blanket term 'afro-beat'.

Club Africa in the gullbuy: