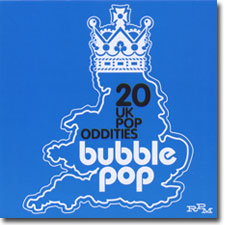 Bubble Pop continues RPM's Lipsmackin' 70s series of compilations, this time around digging into the teen idol and novelty sounds from the early 70s of the UK record label Bubblepop , which was owned by Jonathan King.

This collection meets halfway between Magpie and Velvet Tinmine (somewhere right next to Fading Yellow volume 5 at times) by digging up teen idol obscurities (like Ricky Wilde) novelty acts (like Big Pig With Little Porker), John Peel obscurities (may he rest in piece with some Tractor on this cd), instrumentals (Jonathan King's own Kung Fu Anthem), and Brit folk (like Simon Turner). If you are curious to hear bands with names like Tibble, Bubblerock, Shag, Flannel Cat, or Big Pig With Little Porker, and think that Spreadeagle is one of the greatest band names ever, than check out RPM's Bubble Pop collection (but sadly no Spreadeagle is contained herein).

One notices a penchant for the novelty tune and instrumental, something that permeates this collection and the UK label and lends it all a lighthearted approach to life. Jonathan King's instrumental Kung Fu Anthem (with faux karate sounds), Flannel Cat's reggae instrumental Rubatummy, Big Pig With Little Porker's fake reggae tune Baby Reggae with baby sounds, and the Farmer John meets Dylan's Like a Rolling Stone Clap and Shout (a tune never had such a perfectly descriptive title) by Shag all fit into this bag.

Ricky Wilde was a teen idol that at his best sounds like Joan Jett and at his worst sings about being an astronaut or a polar bear in a somewhat grating style. He's know Mark Radice (featured on Fading Yellow volume 3 and 6). Wilde's Hertfordshire Rock is much better - it's a distorted guitar stomp and handclapper that will have you pressing replay. Teen Wave by Ricky reminds me of Joan Jett and maybe she should've covered this one sometime.

There's a slew of pre-glam rock and gum featured on this compilation - like We Ran And We Ran by Redhead (sort of repetitive), Red Alert by Bunk Dogger (tense sounding, with a Queen-like lead vocal but subdued backing for a unique sound), (Do You Remember) That Summertime Woman by Sparky (sounds like Andy Kim with more of a guitar riff; the b-side to this single You Gotta Have It Sometime is also featured but is not as memorable), Shoeshine Boy by Simon Turner (also available on the Simon Turner versus The King of Luxembourg cd Sex Appeal on Cherry Red), We Went For A Drive by Tibble (fittingly the a-side to a track called On The Road Again; the vocals are a bit loud here), and Vicious Circle by Tractor (b-side to their version of Roll The Dice; this band also put out an album on John Peel's Dandelion label and sound like the supergroup Blind Faith).

The tunes that didn't really do it for me this time were the more folk rock type tunes, though I did enjoy the Bubblerock cover of The Stones' Satisfaction.