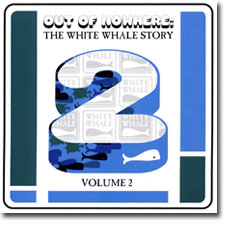 Volume 3 of the Phantom Jukebox series on Rev-Ola follows up on volume one in the series (In The Garden: The White Whale Story), leaving off where that one started. Where volume one seemed to go hand in hand with the other White Whale compilation on Varese Sarabande called Happy Together: The Very Best of White Whale Records, Out of Nowhere: The White Whale Story, Volume 2 leaves both of those compilations in the dust by including dusted off rarities and some true unreleased gems. No longer needing to rely on The Turtles (who were White Whale's biggest group), Rev-Ola has truly dug into the vaults for an incredible compilation.

Out of Nowhere starts out strong with the fiery Little Girl, Little Boy by The Odyssey. Featuring a smashing, edgey rhythm and tense guitar riff followed by a catchy refrain, The Odyssey have a great power pop garage classic in Little Girl, Little Boy. The Odyssey also have music here released under the name Shake with a more subdued cover of The Beatles' Two of Us, which was also covered in a less brash manner by Mamas and Papas member Denny Doherty when he went solo (in a medley with Here Comes the Sun on his Watcha Gonna Do album from 1971). Shake's version has an edge over Denny's version in its emotive power, though his is more harmony ladden.

The Everpresent Fullness have a full cd released on Rev-Ola and here we get to hear their rollicking tune, Fine and Dandy featuring Larry Knechtel's piano and a Bones Howe production. Sadly this tune was supposed to be their first single but instead a Lovin' Spoonful cover was released in its place. Bones Howe also produced The Answer's Why You Smile, but it's The Answer's own production of I'll Be In which has an early Zombies' vocal style mixed with a propulsive guitar riff and drum rhythm which really stands out.

Dalton & Montgomery were the songwriting team behind the the overlooked late 1960s band Colours. They also supplied Nino & April with their Beatlesque Out Of Nowhere which was a highlight from their All String Out album on White Whale. Dalton & Montgomery also have an unreleased gem featured here called Blackmail that was also produced by Bones Howe. Blackmail also has that Beatlesque songwriting style they were so great doing - what a shame these guys have been overlooked (and the Colours album so hard to find).

The Clique's Superman is the lost classic that REM ended up covering. The REM version is much more well known - many people don't even realize it's a cover of an obscure Gary Zekley production. Well, give the original 45 mix a listen, it's an amazing pop gem. Gary Zekley also produced two sides by Dobie Gray called Honey You Can Take It Back and What A Way To Go that both have a Northern soul sound to them.

The Bears were produced by LA-based surf guitarist Jan Davis, who also has a collection on Sundazed called Boss Guitar. Goin' It Alone has a mysterious lonely feel to it, while Work It Out That Way has more of a stomping loungey vocal style.

The Brothers were backed by members of the Wrecking Crew on their It'll All Wash Away With The Rain and Today Is Today. Both tunes have a Lovin' Spoonful sound funneled through The Walker Brothers, thanks to the harpsichords and brotherly harmonies.

JK & Co. have two tracks here from the sweet Suddenly One Summer that has been reissued on Sundazed. The brief interlude that is Break Of Dawn (just over half a minute) is just a teaser for the sweetly naive Little Children, with its nursery rhyme melody and sounds of children playing. It's the type of song they just don't write anymore. I'd been quite curious about this band, and now knowing that a 15 year old (named Jay Kaye) was behind it, really is mind blowing and I'd like to hear more.

The Rainy Daze featured Tim Gilbert and John Carter, the two guys who wrote Incense and Peppermints for The Strawberry Alarm Clock and later released the ultra obscure album on White Whale called Horses. In fact the two Rainy Daze songs Make Me Laugh and My Door is Always Open are featured as bonus cuts on the Horse album. Here we get to hear The Rainy Daze tune Make Me Laugh which sounds like a raw Monkees. We also get to hear one Horses tune called Cheyenne which is much more graceful with the way soft rock and country were permeating the sounds of The Velvet Underground, Bob Dylan and even bands like The Strawberry Alarm Clock.

The Time Zone was really Mort Garson, the songwriter who wrote Our Day Will Come (for Ruby and the Romantics), producer for The Lettermen, The Sandpipers, The Sugar Shoppe, and The Hollyridge Strings, as well as maker of many Moog records like Zodiac Cosmic Sounds, Electronic Hair Pieces, The Wozard of Iz, the Signs of the Zodiac lps, Lucifer - Black Mass, Music for Sensuous Lovers, Ataraxia - The Unexplained, and Plantasia. The Time Zone's Space Walker is as odd as all that, sounding like a BBC Radio Workshop theme song with Moog melody (which sounds so damn familiar!) and a garage rocking back beat.

Walter Scott was lead singer for Bob Kuban And The In-Men before his horrible death when he was murdered. His Just You Wait has a Phil Spector/Righteous Bros/ Walker Bros type of sound though I think Walter Scott might over emote a little too much. The song sounds a lot like Just One Look.

Kenny O'Dell (who later composed the Charlie Rich tune Behind Closed Doors) is heard here in two songs that are so chipper they seem like theme songs from some lost 60s tv shows. Beautiful People (also recorded at the time by Bobby Vee) and Groovy Relationship have that 60s bubbly sweetness which will keep you humming through the doldrums that are your days. Groovy Relationship has the added bonus of a sitar guitar, but I think I like Beautiful People better.

The Christmas Spirit released an ultra obscure and sought after Christmas record with the likes of Linda Rondstadt, members of the Turtles, Clarence White, producer Chip Douglas Hatlelid, and Gram and Gene Parsons all chipping in for a magical Xmas one-off. For those searching for this obscurity, you can stop because here's both sides of this country sing-along rocking Xmas gem.

The New FBI Band recorded a very early side written by Paul Williams called The Room. This song has an odd story because for some reason it ended up on the end of the Everpresent Fullness album when it was originally released (it's not included on the cd reissue). Gladly, we can now hear this mysterious, rollicking Paul Williams instrumental obscurity at last.

White Whale Records in the gullbuy: