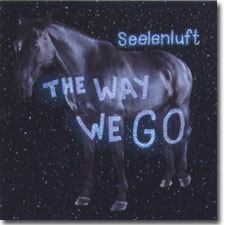 On their first album, The Rise and Fall of Silver city Bob, Seelenluft came across as a darker, edgier, less peppy cousin of sampling masters Tipsy. They took the easy listening sounds of the 40’s and 50’s and brought them into a modern, electronic context, adding a somewhat atonal underbelly.

On their second, Synchroschwimmer EP, they mastered their craft. The pieces were slicker, yet more enjoyable. It was a beautiful collection of instrumentals with a slight edge and some originality to them. It was like Hawaiian flavored offbeat jazz with the sticking melodies and the tasteful electronic flavorings of Beat Soler, the brains behind Seelenluft.

I don’t know what happened. This is perhaps the worst piece of pop trash I’ve even been tasked with reviewing. I tried hard over three listens to find anything redeeming about the album and I was able to find… 3 songs that I liked, two instrumentals and one with lyrics.

Strings of Silvercity is a mini-masterpiece. A brilliant pop instrumental that holds your interest, stays interesting, and wins you throughout with gorgeous melodic lines and pristine production.

The other instrumental is a welcomed departure from the syrupy sweet, empty, lame attempts at pop-stardom contained on this disk. I include in that description the guest vocal appearance of The Jesus and Mary Chain’s Jim Reid on I can see clearly now where his lyrics almost seem to mock bad pop. Pardon me if there was a joke here that I’m just not getting;

I hope they didn’t have to pay him for this.

It’s bad enough that they go forth with lyrics, as on Pleasureboy

Even worse, on Baby baby;

But then they actually have the gall to print these lyrics on the inner sleeve. They really leave themselves wide open here. I can’t help it. Brittany Spears herself was even more clever about saying the same things.

The best tracks are the two instrumentals and one with French lyrics, Mes Amis, a catchy tune with some nice hooks and somewhat of a new wave feel. But really, since I couldn’t understand the lyrics, I was able to stomach it. Based on the rest of the album, I don’t think I want to hear the translation.

While the bass lines are interesting and the synth sounds are brilliant (even a bit retro), the rest is hard to swallow. Or too easy to swallow. Either way – The way we go was maybe the right way to go for Beat Soler’s wallet, but musically, a tragic turn.