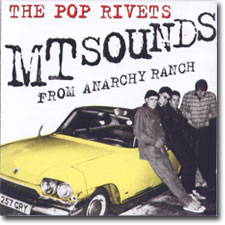 The early career recordings of Billy Childish continued on the 2nd album MT Sounds from Anarchy Ranch released by his first band The Pop Rivets in 1979.

A compilation which consisted of studio work and some live recordings, it makes for more added listening and extends the work he had done on The Pop Rivets first release Greatest Hits.

The juxtaposition of the well recorded studio recordings which somewhat dampen the band's sound but not their energy and the raw live recordings which break up that somewhat dull studio sound as well as mixing up the cd track order (the cd lists 10 tracks but there is really 14) makes for a nice dichotomy even if the whole doesn't add up to the sum of its parts.

Like many punk bands, The Pop Rivets had a variety of tastes funneled into the recording studio which can make for some interesting variety but make it hard for bands to find their sound. So songs like Hang Loose Mongoose and 2 is 2 which have the mod/Jam sound meet up with songs like Skip Off School which has more of a Damned sound (even quoting from The Damned's Love Song). (I'm Just a) Satellite (For Your Love) and Empty Sounds are probably the best of the lot pointing to Billy's prolific songwriting career with its frenetic pace and flurry of guitars.

There's even hints of a Wire influence which could've led the band into the indie rock sound of the 80s and 90s if they let it on songs like The Spoken Voice and the live tune Song Song.

Probably the most interesting thing about the MT Sounds from Anarchy Ranch album is the inclusion of a set of live songs listed under the umbrella title of The Pop Rivets Mak Show. These live recordings made on tour in Europe include a very raw live sound with rock'n'roll classics like You Really Got Me, Wild Thing, and What You Gonna Do About It? There's also two Childish originals, one of which points to Thee Headcoats sound of the future called Laughing At You.

The Pop Rivets in the gullbuy: